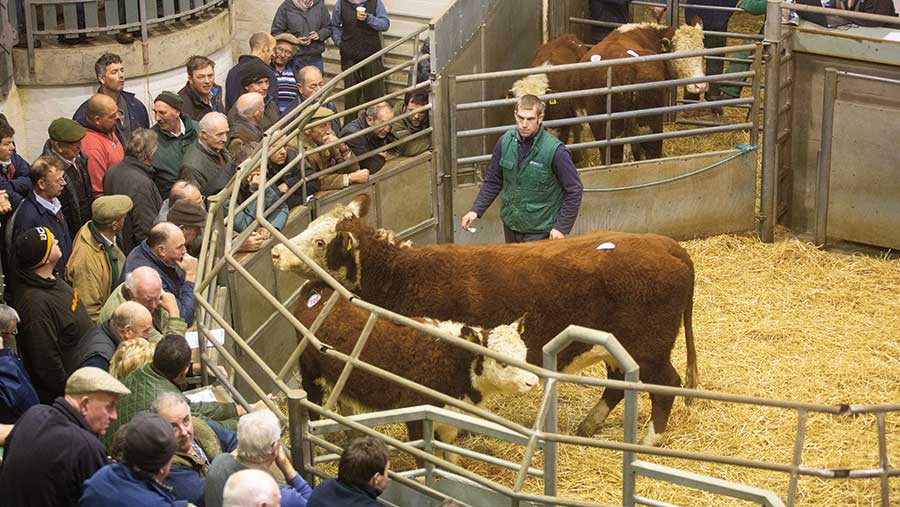 Poor finished beef prices have taken the shine off some sales of cows with calves at foot this year as values for prime animals have fallen to a three-year low.

This is according to auctioneers during a period of increasing beef sector frustration at what industry leaders are calling prolonged unstainable prices.

Both the NFU and the National Beef Association voiced concern at the lack of promotion on supermarket shelves and lack of competition over beef carcasses last week.

However, auctioneers say that, given difficulties facing beef finishers, trade for breeding cattle has proven resilient this spring.

Weekly sales of cows with calves have seen trade back £60-£70 a unit and sometimes back £100 a unit on the year at Welshpool, auctioneer Richard Evans told Farmers Weekly.

Weekly throughputs peaked at 70-100 head earlier in the summer and have since dropped to 20-40 cow-calf outfits a week.

A Hereford-cross heifer with a Governor-sired Blue calf at foot made £1,500.

“One definite change is the Blue-cross cow out of the dairy cow is not as popular as it was,” says Mr Evans.

“It can be harder to calve and perhaps not quite milky enough, but native crosses have grown in popularity and the first-cross Limousin cow is still very popular.”

Better heifers with strong calves are making £1,900-£2,000 regularly and most young cows are a firm trade.

This month’s sale of breeding cattle topped at £2,020 for a Limousin-cross heifer with a heifer calf at foot at J36 Crooklands (13 June).

Cows topped at £1,850, with a second-calved Limousin-cross cow with a Limousin-sired heifer calf at foot.