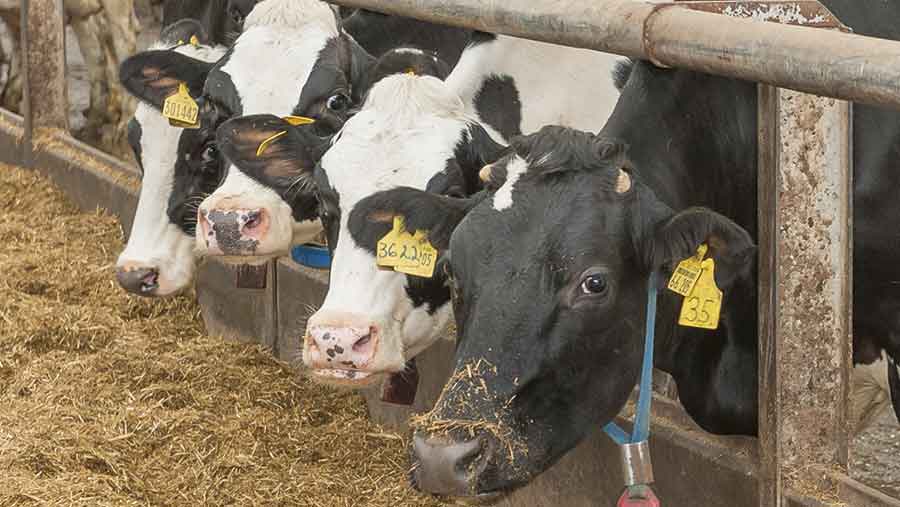 Dairies could save on concentrate feeding this winter, after evidence from UK silage clamps showed a 1.1% increase in crude protein on the year.

Figures from 200 first-cut silage analyses by Mole Valley Farmers show that average crude protein levels have lifted from 13.7% to 14.8% in 2017.

The company has estimated this could save 6p a cow a day on a simple 35 litre ration at current feed values.

He said farms might find slightly higher metabolisable energy (ME) levels as a result of earlier cutting and that lower Neutral Detergent Fibre (NDF) and higher lactic acid was good news.

“When you have higher-quality silage, the cow can eat more of it, digest it faster, the rumen empties quicker, subsequently meaning more room for forage and allowing you to reduce concentrate input,” he told Farmers Weekly.

“So while there may be farms with lower NDF silages, farms might find that cows eat more to compensate for this drop in fibre.”

His message was that farms had done “a good job” producing higher-protein silage with lower fibre and higher lactic acid and now the job was to adjust rations around the silage.

“Silage is the cheapest feed in the ration through the silage feeding period. Get your silage analysed and adjust your feeding around the silage.”

He stressed there can be huge variability in silage quality and that monthly sampling uses as many samples from across the clamp.

“Multiple samples need taking and this means getting samples from near the clamp wall and the top of the clamp as in some clamps, 25% of the silage is to be found within 0.5 metres of the walls or top of the clamp.”

“Protein levels can also vary considerably when moving from one field to the next through the clamp,” he said. “As contractor machinery gets bigger, as do silage loads, the fluctuations can be even more marked.”

Dr Davies said the ball park figure to stay under for the total ration is a Rufal score of 35. “Above this and there is a risk of milk fat depression,” he said.

This means analysing the Rufal scores of each component in the ration is advisable.