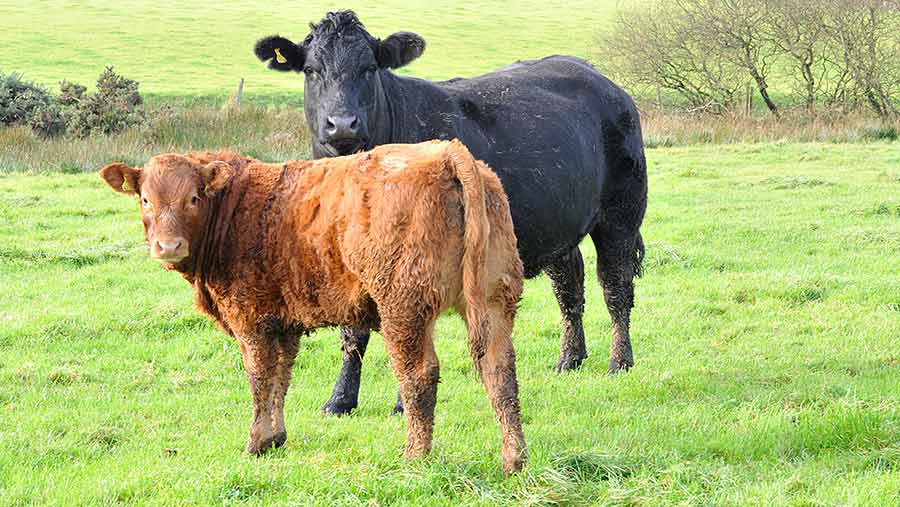 Synchronising heats has enabled a Welsh beef producer to achieve a 77% in-calf rate to first service, resulting in a weight gain advantage over calves born from repeat heats.

Llyr Hughes farms in partnership with his father, Peredur, on Anglesey, producing suckler beef from a commercial herd of 120 Limousin and Limousin-cross cattle.

In 2017, 89 cows calved in the spring over a 12-week period and the remainder in the autumn, over eight weeks.

Mr Hughes is now aiming to get the majority of calves born in the first three weeks of those calving periods.

“We aim to sell as many calves as possible off their mothers before housing to reduce our winter feed costs, so tightening the calving period would mean we could sell more before housing,” explains Mr Hughes, a Farming Connect Focus Farmer.

Through his work with Farming Connect, he embarked on a project comparing the potential benefits of combining oestrus synchronisation with artificial insemination against conventional service with a stock bull.

The trial and how it worked

Synchronised AI was used on 55 spring calving cows and natural service on 34.

Following a plan, developed by a breeding specialist, cows in the synchronised group were inseminated twice, on two consecutive days in June.

The benefits of condensing the calving period

“Getting cows in calf at the first service gives calves a head start over calves born from repeat heats,” says Mr Hughes, who explains that on average calves are growing at 1.2kg a day from birth. 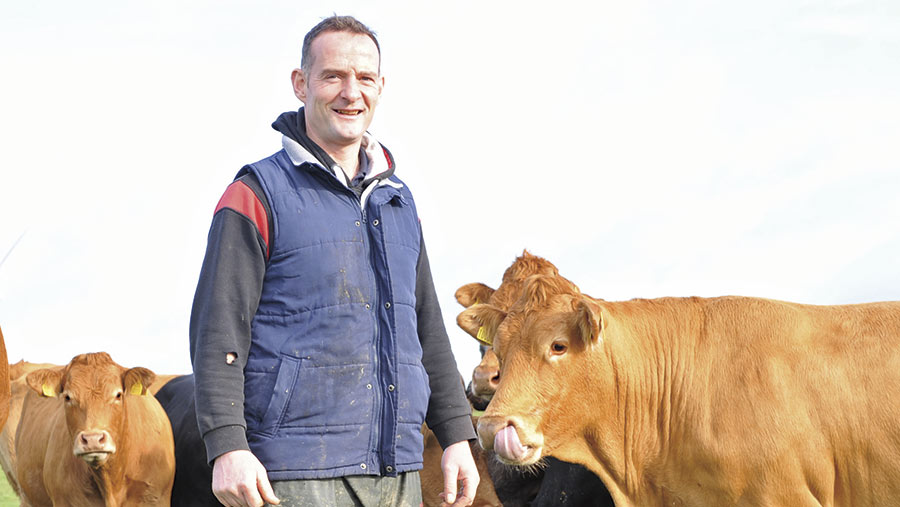 Llyr Hughes anticipates an increased value of £72 per calf from synchronised breeding. The majority of calves at Fferam Gyd will be born in the first three weeks of the spring calving period © Debbie James

He says that synchronisation equates to a 25-day advantage over a standard calving pattern. At 1.2kg/dlwg, calves would therefore be 30kg heavier.

He adds: “At £2.40/kg that would result in an increased value of £72 which easily pays for the synchronising.”

Having a better knowledge of calving dates will also enable forward planning of labour, health and shed space, he believes.

To ensure a high conception rate, cows that have a history of calving problems or conceiving should not be included in the programme, Mr Hughes adds.

This year he sold 60 of his 90 calves before housing. “If I could get that to 80 it would mean less winter feed, less straw and less work.”

Mr Hughes used semen from his own stock bull, Derrygullinane Kingbull, which he purchased at Roscrea in October 2016 for 10,800gns.

“Genus ABS were interested in him, so they have taken his semen for marketing,” explains Mr Hughes, whose two main selection criteria are calving ease and 200-day weights.

Synchronising bulling reduces the labour time associated with AI. Mr Hughes does his own AI and it took him and another helper 12 hours to synchronise and AI 55 animals for the first service period of the project.

“For a non-synchronised AI programme, the group would need to be observed for 90 minutes a day over an eight-week period which totals 84 hours,” Mr Owen calculates.

“It is clear how a fixed time AI programme can be of benefit to farmers who are short on time and skilled labour.”

Of the 34 cows that ran with the bull, three failed to get in calf and the calving period will be longer, says Mr Owen.

Advice on AI’ing while cows are at grass

A field close to the farmyard at Fferam Gyd was set aside for grazing during the synchronisation and AI period.

“In a spring calving herd, where the cows aren’t housed during the breeding period, it is important to plan for the job,” says Mr Hughes.

“I set aside a field near the yard; it keeps cow stress levels down if they don’t have to walk far.”

Cows must be split from their calves, but Mr Hughes says this didn’t create any problems.

A good handling system is essential, he adds. “This reduces the stress to everyone involved. The cow is less stressed and it’s safer to handle them.”

In hindsight, due to the very low repeat numbers, Mr Hughes says it would probably have been more beneficial to use a bull to sweep up the repeats instead of AI because of the time this took.

“There was a lot of labour involved in observing those 13 animals,” he admits.