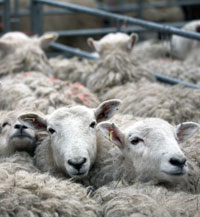 The Farmers’ Union of Wales has backed plans to build a livestock market near Newport to replace the town’s 160-year-old market which is set to close next month.

Auctioneers at the existing market have applied to move the mart to a site at St Brides Wentlooge, which they say would lend itself ready as a market venue.

In a letter urging Newport Borough Council to back plans for the site, Mr Davies said the loss of the market would have “enormous impact” on farmers in the area, who currently sell about 2000 sheep and 300 cattle at the site.

“The extra haulage involved for farmers to take their stock to a market outside the area would make it impractical on both a cost and livestock welfare basis,” he wrote.

“Thus the importance of a market in the Newport area cannot be over emphasised as without it a vital cog in the production of food at a local level will be lost.”

Mr Davies added it was vital there was a “seamless transition” between the two sites as any break in trading would make the launch of a new market difficult.

The planning application for the new site is set to be heard by the council’s planning committee on 11 February.