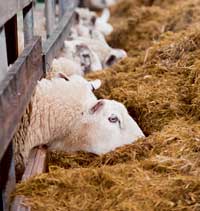 Beef and sheep farmers should plan now to prevent fertility and fodder problems next winter, according to the SAC’s Gavin Hill and Basil Lowman.

Speaking to Farmers Weekly at the Beef Expo, Hexham Auction Mart, Mr Hill said farmers should recognise potential problems in front of them and address them early.

“Because most farmers were forced to use up extra feed stocks during the poor weather at the start of the year, next winter’s feed supplies could be a real issue.”

And the long winter and slow spring meant many stock were leaner than normal at turnout and faced bare pastures when they were eventually put out.

“Young lambs and calves are doing well off milk, but their dams are suffering, potentially compromising their fertility.”

It will be harder to finish cattle off grass this year, so it may be sensible to use cheap barley and finish suitable animals inside over summer, said Mr Lowman.

“Walk the farm and assess cattle rumen fill. When fill is poor and there is little silage around, it may be worth bringing them in.”

And first and second calvers need particular attention in poor summers, such as this year, says Dr Lowman.

“Because heifers are still growing at the same time as feeding their calf, it may be worth weaning first calvers early to ensure they are in the best condition for the winter.”

And although grass growth may not be as good as usual, first cut should be taken as normal, said Mr Hill.

“There may not be the bulk, but quality will be good. It is important not to compromise second cut. And in some areas it may be possible to bulk up silage with potatoes or whole drop cereals.”

However, fodder production must not be at the expense of grazing breeding stock, he said.

“There is no profit in having pit falls of silage, but high numbers of barren animal.”

Increasingly we will be encouraging farmers to use their own cereals or buy standing crops for silage, continued Dr Lowman.

“Taking off whole crop silage will mean producers will have more time to grow a catch crop, such as Italian ryegrass of stubble turnips to reduce winter housing time and produce a winter feed.”