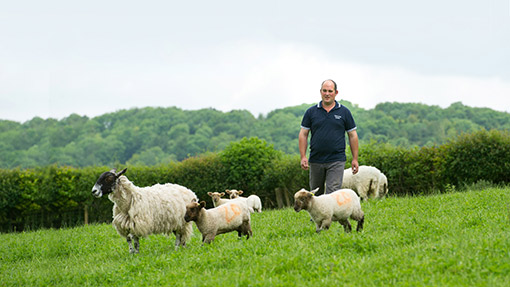 Flock manager Matt Blyth opens his tablet computer – not the farm gate – when deciding where to move his sheep.

His aim is to use grass more efficiently by applying fertiliser at the right times and through careful stock management. Key to this is having invaluable data readily accessible on the tablet.

“Planning ahead to work out what [grass cover] we’ve got and what’s needed is important for stock management,” he says.

Mr Blyth manages Didling Farm in the heart of the South Downs National Park, which has three different soil types within its 489ha – chalk, green sandstone and clay.

Why not take our Grassland Management Academy and earn valuable CPD points?

Developing strategies specific to each soil type has been crucial in maximising productivity of the 1,000-ewe flock. “It’s very wet in the bottom in winter because of the clay and the chalk top is very dry in summer.”

For Mr Blyth, his best case scenario is keeping off the lower ground between mid-November and early March, so clever use of the permanent pasture at the top of the downs is needed.

But 57ha of the higher ground is in the Higher Level Stewardship (HLS) scheme and ring feeders are not permitted.

So, instead of supplementary feeding, Mr Blyth takes sheep off the chalk top in July or August to produce a wedge of grazing for winter feeding.

He believes this is as good, if not better, value than a bale of silage, as there are no costs involved and stock use it well at that time of year for maintenance.

A key change at Didling Farm was the switch from set stocking to paddock grazing, which has already yielded an extra 2t DM/ha.

“It’s all about getting your head around the logistics. Stock have to move, even from one end of the farm to the other, wherever grass is available,” says Mr Blyth.

The aim is to split all ground into 2-3ha paddocks, grazing groups of 300-600 animals – the maximum number Mr Blyth can handle and sort on his own.

After lambing, smaller groups of about 40-60 ewes and their lambs are put in each paddock, including those earmarked for silage production at the start of the grazing season. This prevents mis-mothering before they are tightened into larger groups of 300-600 head to intensively graze four to seven weeks later.

“Sheep always stay in these size groups so I have to vary the amount of time spent on each paddock according to grass availability and paddock size. We go in at 2,600-2,800kg DM/ha grass cover and leave at 1,500kg DM/ha,” he says.

“When the sward height has exceeded the ideal for sheep grazing, we calculate the amount of days before cutting and give the grass 2.5kg/ha of nitrogen fertiliser for each day it will be shut up.

“This is done because we need more early-season growth before the soils dry out. Once cut, these fields can come back into the grazing rotation,” says Mr Morgan.

But what makes this even more impressive is the 60% increase in stocking rate, while simultaneously nearly halving the total grazing area available, (see graphs) and all in the face of triple anthelmintic resistance, challenging soil conditions and environmental restrictions.

Even with a less than favourable start to 2013 weather-wise, Mr Blyth still managed to wean his lambs in 12 weeks, down from 16 weeks the previous year. He also boasts more than twice as many lambs in the top three weight classes at weaning than in 2012 (see table).

By using sward sticks two to three times a month across 60% of the farm, Mr Blyth optimised output from grass and identified poor grass and low-quality fields.

Opting to feed supplements early prevents late lambs taking the flushing ground for ewes, as he believes lambs are three times better at converting creep at this age, compared with in the autumn.

He aims to sell 80% of stock by the time rams go back in (mid-October) to ensure there is enough winter feed in front of the ewes.

“It’s all about forward planning. Finishing lambs early or selling stores are options, and using a controlled level of creep feed is sensible. They are all tools at your disposal and you need to measure payback against cost,” he says.

“The lambs are getting bigger and need more grass at the time when the grass growth rate is tailing off – there is not enough grass to feed them. We were able to identify the deficit and fill the gap with silage or sell surplus stock as store lambs in August and September.

“This year we sold 100 in-lamb ewes with singles as we didn’t get the silage in the summer months to be able to feed them.

“We know what stores are worth, we know the feed costs, but we can’t guarantee the finished price. You have to ask yourself: Do you want to dip into your overdraft feeding them or put money in the bank selling them?”

Mr Blyth is considering whether to double the flock size to 2,000 ewes or rent more land to arable use. And with all the information he is recording, informed decisions can now be taken as to which is possible and profitable.

With help of Mr Morgan, full soil analysis and fertiliser planning was carried out and he advised on new mixes of grasses, legumes and herbs to suit the system.

These leys are drilled into the lower ground in a three- to five-year rotation with arable crops. This rotation has a huge benefit in weed control, Mr Blyth explains.

During the final winter of the ley, sheep are stocked more heavily to protect the younger leys.

The following year, the land is used for spring cropping, followed by winter wheat or winter barley, during which time weeds are tackled before the land is resown with a new grass ley, he says.

But despite being relatively weed free and holding moisture better than the higher land, the clay still dries and cracks in the summer. Red clover is, therefore, used for its drought resistance, as is chicory, which has a large tap root.

Phenomenal lamb growth rates were seen by Mr Blyth from chicory, although he was unable to finish lambs on this alone. He has since switched from chicory to a mix of chicory with high sugar grasses.

And although it has nitrogen fixing benefits, when there isn’t much grass, the clover starts to flower and produces tannins, putting sheep off grazing due to the bitter taste it creates.

“We have a more strategic approach to nitrogen use and use it as a tool alongside different seed mixes to optimise forage production and animal output,” he says.

“With such seasonal variation we are still making tweaks to mixes and gaining a better knowledge of what is best for the farming system. The only way to find out if something works is to look at your own farm and try it,” says Mr Blyth.