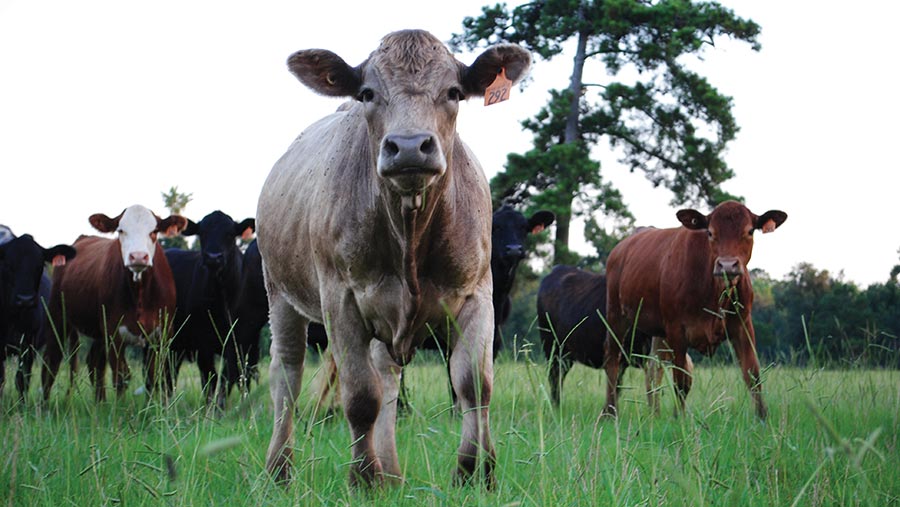 Working with nature has increased soil organic matter from 0.5% to 5% and doubled carbon sequestration at White Oak Pastures farm on America’s east coast.

Although owner Will Harris, a fourth-generation farmer who farms 2,023ha (5,000 acres), has seen a huge improvement in soil health, he says production costs have risen more than 30%.

With no support offered to farmers in the US in the form of greening payments, he is plugging this gap by adding value and selling direct to consumers, having borrowed $7.5m (£5.7m) for an on-farm abattoir, butchery and shop.

Mr Harris says he made the move to regenerative agriculture after becoming disillusioned with the principles behind conventional cattle rearing, having formerly reared animals for the commodity beef market, selling stock by the truckload of live cattle.

He says he had become oblivious to the grave consequences of fighting against nature and was steering the family heritage in a direction that was not environmentally sustainable.

“Industrial agriculture was really, really good with regard to scaling up and making food abundant and affordable,” Jenni Harris, Mr Harris’ daughter, explains.

“But it was not really good for the soil, the animals and the communities that thrived on agriculture.”

The catalyst for changing from a “conventionally run commodity cattle farm” came when Mr Harris learned about a new type of discerning consumer in the 1990s.

This customer was concerned about three things: animal welfare, environmental sustainability and the revival of rural communities.

This gave them the confidence to switch to regenerative farming. Realising that cost of production would increase from their conventional farming system, which was running about 300 head under Mr Harris’ father’s management, the family decided they would have to add value to produce by selling direct.

There is virtually nothing the family doesn’t sell from the zero-waste system. 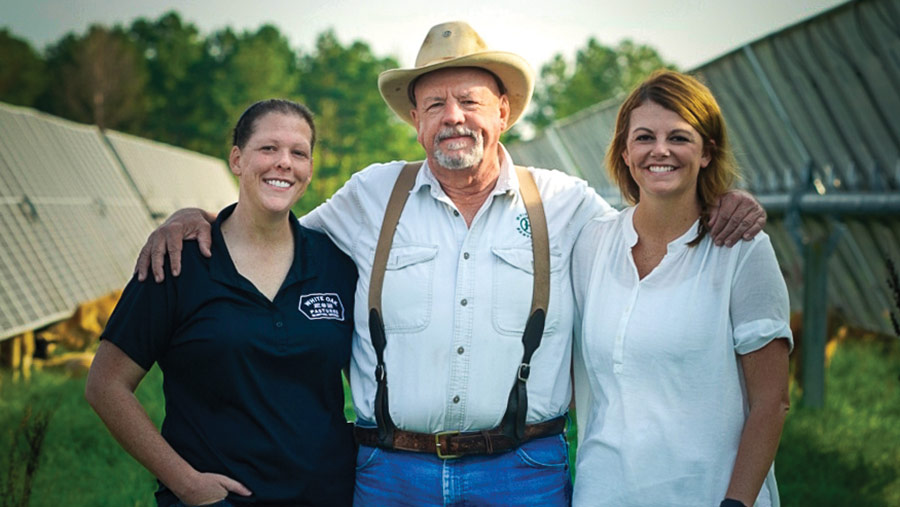 The farm has its own retail outlet and online shop and works with grocery stores and restaurants on the east coast of the US, to market everything; from meat, honey and eggs, to leather bags and tallow soap and candles.

They have often bought or rented land that was previously used for growing peanuts or cotton, which was virtually redundant in organic matter and visibly “blowing away”, the soil was so degraded.

“The first two or three years is a cash sink – we just pour money into it and get nothing back – but by third year, the land starts to become more biologically active,” explains Mr Harris.

He says organic matter is the single most telling measure of the soil’s improvement.

In the 20 years they have been using animals (see box), they have taken the organic matter of many of the soils farmed from 0.5% to 5%.

“When I was an industrial farmer, soil testing was very important because there were very few nutrients in the soils,” Mr Harris says.

“We checked pretty much every acre every year and then prescription added what was needed. That’s completely gone now. The only additions are through the animals.”

The three sources of nutrients added to the soil are:

Ruminants graze almost 12 months of the year, receiving no concentrates. The only housing they have on the farm is for chicks and open farrowing houses, which are there if the pigs choose to use them.

All poultry is sourced from hatcheries, but the mixed-breed herds and flocks are closed.

Eight years ago, the family stopped purchasing purebred replacements for the cattle herd, which now stands at 3,000 head.

They are stocked at a cow-and-calf pair to the acre, and moved every one to two days.

“We are now breeding our own breed of cattle from the genetics that have been mongrelised [interbred] over the past 80 years.”

Sheep were the first species to break the “monoculture of cattle” at White Oak Pastures when several mixed flocks were bought on to the farm in 2008.

Breeds include the Dorper, which originated in South Africa from crosses between the Dorset and the Blackhead Persian, as well as the Katahdin, developed from Caribbean wool-less breeds.

Mr Harris says that letting the animals behave more naturally has been “magic” from a health perspective.

No vaccinations or treatments have been required for external parasites in a decade and stock are only spot-wormed, rather than worming the whole herd or flock.

How they fix degraded land

The process of restoring pasture through “animal impact” begins with a process called “hay bombing”, which is where a large number of cattle will be put on to the land to forage and are fed 40+ bales of hay a day.

The cattle kickstart natural cycles by fertilising the soil with dung and urine and treading hay into the soil.

The ground is then ready for perennial grasses to be planted and rotationally grazed, which helps control weeds.

Cattle go into a former crop field as soon as infrastructure can hold them, but it will be a couple of years before that field can be deemed as pasture.

Cattle graze first followed by sheep – and sometimes hogs and goats – and lastly, chickens and turkeys.

The poultry “cleanup crew” eat weeds the ruminants don’t and peck and scratch the soil, evenly distributing dung, which works as a natural fertiliser.

Planting in the sub-tropics

The farming model and the sub-tropical climate of the farm, which never sees snow but receives 127cm of rain a year, require reseeding to be a fairly simple process.

All of the land farmed is sown with warm season perennial grasses. The first variety planted is Bahia grass, the cheapest variety that Mr Harris says starts the “healing process of the soil”.

“I love having a different variety of flora in the soil, but it’s really very expensive to do that through grass reseeding alone and, when you make the soil healthy again, it’ll come from the seed bank in the soil,” says Mr Harris.

Every autumn, each acre is overseeded with a mix of cool-season annuals because there are not a lot of cooler-climate perennials that will grow, apart from white clover.

The seed mix this year included:

No herbicides have been used for two decades. “Weed” is not a word used on the farm, but “less desirable plants” are not a problem because there is usually a livestock species on the farm that will eat them.

“The production side was easy. Moving back to a production model that was more in sync with nature was fun. I enjoy it a lot more than the industrial model,” says Mr Harris.

“The real sacrifice comes from the fact that when you raise animals the way we do it, you increase your cost of production, so you’ve got to find a market that will pay you for that value and the additional expenses you put into the production side.”

Mr Harris says that it is incredibly difficult to determine cost of production (COP) in their system because it is all so interlinked.

But he estimates that the COP of their pasture-raised beef is around 30% higher than the industrial average and it would be about 50% higher for the pork enterprise.

“When you cease to use chemical fertiliser you give up a tremendous amount of yield and carrying capacity in the short-term,” says Mr Harris.

The family had to scale up to make the processing investment pay.

But they think regenerative farming is feasible on a smaller scale as long as there is a means of getting a premium price.

“I don’t think bigger is better – we were forced to be this big,” says Mr Harris.

“If you are lucky enough to have one acre within striking distance of New York, you could make a lot of money there.”