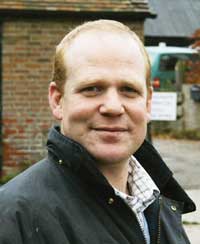 Farming at Moat Farm near Aylesbury, he started using a plate meter to monitor grass growth in 2009.

So far it’s helped him maintain grazing through a fairly tricky summer, identified areas where compaction is limiting growth and highlighted a palatability issue with some of his fields.

But most of all it’s helped him plan how to use his grassland to get the best out his 500 North Country mules and Suffolk crosses.

“None of my grass had put up a seed head until every lamb had left the farm last year – I call that perfection.”

With around 50ha (120 acres) of permanent pasture on heavy clay soil that has not been reseeded for years, Mr Pearce aims to finish his lambs in 100 days.

“You’re always told your grass is your best asset, but I’d never really known how much I had and how quickly it was growing.”

The big eye-opener came in mid-summer. “Until I measured it, I hadn’t realised quite how much grass growth tails off, and how dependent it is on rainfall.”

As growth dipped down to just 0.5cm a week in mid-June, Mr Pearce tweaked his grazing plans and held off some cattle that were due to come in over the summer.

“Then the rain arrived and the grass took off, with growth rising to 3cm a week.” He then kept his pastures tightly stocked until the lambs were sold at the end of August.

This year Mr Pearce is already preparing for the predicted spring rush of grass growth and how he will adapt his rotational grazing system.

“The ultimate aim is to do a grass budget and ensure adequate cover from mid-February. The plate meter helps you anticipate when you need to move the stock.”

It’s also highlighted a potential palatability problem: “In some fields the sheep would graze the sward back to 1500 kg/ha of DM, while in others they wouldn’t take it back further than 1800.

“We’re now looking at reseeding those areas and perhaps putting a greater clover content in or higher sugar grasses.”