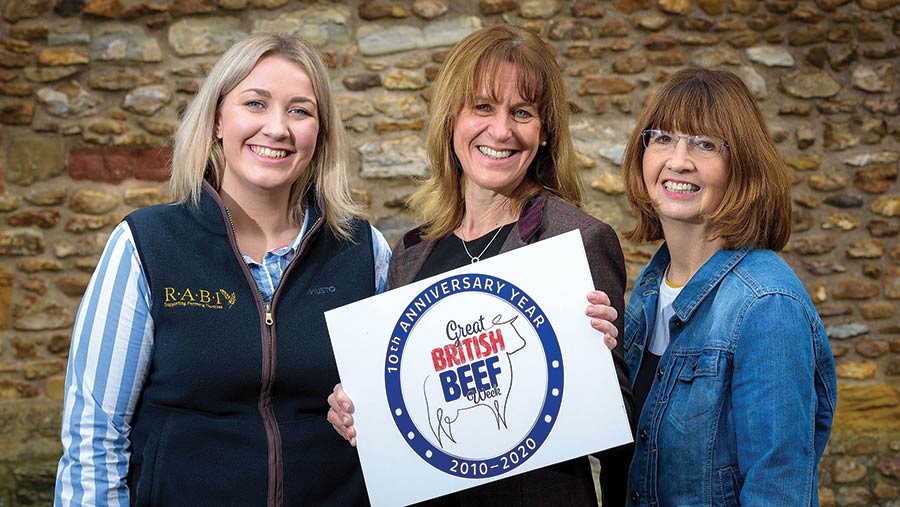 Farming families and the public are being encouraged to celebrate the best of British beef as Great British Beef Week marks its 10th anniversary.

The celebratory week – which runs from 23-30 April – aims to raise money for the Royal Agricultural Benevolent Institute (Rabi) while shining a spotlight on the high quality British beef can offer and promoting its nutritional and environmental credentials.

Thousands of families are expected to eat a roast dinner or have a barbecue this weekend – with British beef the centrepiece of a special meal at home because the coronavirus lockdown means they can’t dine out or go further afield.

Jilly Greed, co-founder of Ladies in Beef, which organises the promotion, said coronavirus meant this year’s week nearly didn’t go ahead. “We did consider postponing the week, as it is undoubtedly a very uncertain and challenging time for everyone,” she said.

“However, with empty shelves causing consumer confidence to waver, we believe there is an opportunity for the beef sector to come together to reassure people we are working incredibly hard to put food on their tables and to inspire them to cook with a range of beef cuts.”

Ladies in Beef has about 150 members. The 2020 campaign will champion the quality and provenance of Red Tractor assured beef. It had initially aimed to raise some £100,000 for Rabi but will be going ahead in scaled-down format due to the lockdown.

“Events which were due to take place during the week have been cancelled, including fundraising events for GBBW’s charity partner Rabi,” Mrs Greed said. “However, online and traditional media activity will still go ahead, albeit adapted to ‘the new normal’.”

Mrs Greed, who co-founded Ladies in Beef with NFU president Minette Batters, added: “Every single beef farmer is passionate about the quality of the beef they produce, otherwise they simply wouldn’t be doing it, and it’s vital that we communicate that passion to consumers.”

A decade on, beef farming is rarely out of the headlines – often for the wrong reasons. But Mrs Greed said the sector had a great story to tell. British beef production was among the most sustainable in the world and boasted a carbon footprint around half the global average, she said.

Mrs Greed said: “It feels like beef farming is being attacked from all angles at the moment. However, campaigns like this allow us to fight back by talking about beef’s nutritional qualities and how farmers are actively helping the environment.”

The 2020 campaign will champion Red Tractor assured beef through a range of cuts and dishes, engaging consumers through both retailers and foodservice. Supporters will be able to donate to Rabi via the Just Giving website.

Mother and daughter farming duo Celia and Kirsty Gay are this year’s GBBW ambassadors. They run a suckler herd of pedigree South Devon and Aberdeen Angus-cross cattle near Bath. Their farm is also home to a farm shop, butchery, café and events enterprise.

The issue of carcass balance is particularly important this year – with more people buying mince during the lockdown on the back of a sustained period of low beef prices. Some producers have seen farmgate prices drop by 16% over the past 18 months or so.

Mrs Greed said consumers were understandably opting for quick and easy meals and batch cooking with mince. But the closure of pubs and restaurants meant there wasn’t a ready outlet for more lucrative cuts such as steaks and roasting joints.

“People aren’t eating out but they can still eat well at home,” she said. “There is a good history of retailers doing steak offers at a really good price – and they could do that so consumers get a good deal. The margin could be passed back and then we would shift this surplus stock.”

Farmer and TV presenter Adam Henson, who is supporting the initiative, said the campaign to promote beef was as important as ever. “Hopefully it will encourage farmers and the public to come together online to support each other and champion quality British beef.”

To get involved in Great British Beef Week and download promotional material, visit the Ladies in Beef website.

Ms Garrett’s family have been beef farmers since the 1940s when her grandfather bought four Sussex heifers. Today, the local native breed herd comprises more than 200 cows and followers, all reared on grass near Canterbury.

“They are easy calving and good at converting poor quality grass to beef,” Ms Garrett said. “They fit our system very well. We’ve had cows grazing here for 70 years – we are helping to improve the habitat while working with Natural England.”

Beef producers needed to shout about the reality of British beef farming, she said. “As farmers, we haven’t been fairly portrayed and this is our chance to explain to people why British beef is different to beef from elsewhere in the world.”

Grass-grazed beef was much more sustainable than more intensive feed-lot beef reared in other parts of the world, Ms Garrett said. It had a lower carbon footprint and made the most of the landscape too.

Yorkshire farmer and Ladies in Beef member Catherine Thompson is one of a growing number of producers who believe commercial and environmental farming go hand in hand.

Ms Thompson took over her father’s farm, Holme House, more than 20 years ago. She has both arable and livestock on the 400ha farm, with 50 pedigree beef cows, a pig unit, sugar beet and barley.

A number of environmental measures are in place on the farm. “There is a river running through the farm with a significant number of wading birds that live there, and we have recreated a wetland meadow on riverside areas of the farm where the cattle are grazing,” she said.

Grass-reared beef cattle are key to looking after the landscape – while producing high-quality food that meets exacting standards. “We feel really strongly about the environment and believe it is really important that their environment is protected and enhanced,” she said.

“I feel absolutely that there shouldn’t be this divide between commercial farms and those that are environmentally friendly. They can work hand in hand, and I think all farms that have the facility can work harder to offer greater environmental responsibility.”

Campaigns like Great British Beef Week can benefit UK food and farming – but farmers must avoid getting into online arguments with detractors, according to communication specialist Amy Jackson.

“There’s still lots of scope to have in initiatives like this – and in fact we have seen in recent weeks how much support there is for British produce,” she said. “But what we do need to do is evolve how we run them.”

Social media campaigns often attract a backlash of negative commentary from anti-farming activists. This can mean that each positive message sent out receives a negative response in return.

“We need to evolve how we do it and not go down these routes where people have the opportunity to denigrate it – but look at other ways we can promote British produce through these kind of initiatives,” Ms Jackson said.

In the case of Great British Beef Week the focus would be on on the versatility and nutritional value of British beef, said organiser Jilly Greed.

It would also explain how British farmers reared cattle to some of the highest animal welfare and environmental standards in the world.