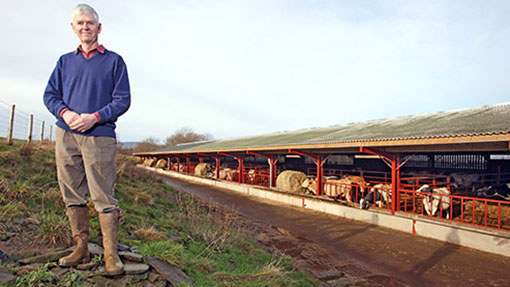 After giving up the 445ha part-rented part-owned, mixed arable and grassland farm he ran in partnership with his brother, Bryan, earlier this year, Mr Thomas and his wife Gill moved to Hollingwood Farm, Abbeydore, in September.

He calls the 59ha grassland farm his “retirement home” and while he may have slowed the pace slightly his hunger for performance certainly hasn’t subsided.

His target is to finish all male progeny from his 100-cow suckler herd by 400 days of age (approximately 13 months) at 400kg deadweight and the females at 14 months at 320kg deadweight.

Last year he recorded some of his best carcass gains to date. His 2012 crop of bulls recorded a deadweight of 406kg at 426days.

They sold for an average of £1,600, with the majority grading E and U+. This equated to an average carcass gain of 0.941kg from birth (not deducting birth weight).

Meanwhile the heifers averaged a daily carcass gain of 0.72kg a day, recording overall deadweights of 314kg at 437 days and averaging a sale price of £1,277.

Mr Thomas is a firm believer that buying quality breeding stock is the foundation stone for finishing success.

He sources British Friesian cross British Blue cows from markets in west Wales. He favours the breed for their milkiness and good mothering ability.

They are then put to high-quality Blonde stock bulls. Mr Thomas believes it is a “perfect marriage”, with the length of the males complementing the width of the British Blue breed.

“I’m a great believer in good conformation and bulls have to be sound on their feet and legs,” he explains.

One of his most prolific current stock bulls is Doncombe Exodus, which he purchased for 6,500gns from Bristol pedigree breeder David Knight after he won the championship at Carlisle in 2011. “He has thrown some really good calves,” notes Mr Thomas.

The herd of 100-suckler cows is put to the bull in May so they start calving in February ahead of turnout, when the flush of grass helps to boost milk production.

Weather permitting they are then housed in straw yards from November.

When the couple moved to the property the farm’s two existing poultry sheds were at first a drawback.

“When we were looking there were very few farms on the market. This place suited us – it was only 10 miles from our home farm. But it didn’t have any cattle sheds.

“I thought about becoming a poultry farmer for a week, but I don’t really like hens,” he admits.

Instead Mr Thomas decided to intrepidly convert one of the sheds to accommodate the herd. The project has enabled him to use existing infrastructure to maximise herd health and performance.

Previously the shed was home to 6,000 laying hens, but the vast area has been transformed into a 17-bay cattle shed, which can accommodate stock under one roof.

“We took out all of the plinths and crushed them – altogether we crushed 500t of concrete. This was replaced with smooth cement flooring and we grooved the feed passage because it was like glass in places.”

The sidewalls were dismantled and replaced with concrete walls and two-inch spaced Yorkshire boarding.

“I left the insulation in the roof but opened up the apex of the roof to let the air out. Because it is smooth underneath the air flows really well.”

Hot air rises through the roof and creates negative pressure in the building, which draws cool air into the building from the side inlets – a process known as the stack effect.

On hot or foggy days, when there is little wind movement, recycled fans left behind from the poultry unit are switched on create air movement.

Gates separating the feed trough from the straw yards allow the feed passage to be cleaned out each day and the roof has been extended over the feed area to keep feed dry. This has saved a considerable amount of straw.

Meanwhile strategically placed doors provide machinery access, allowing the shed to be mucked out and creep feeders to be dispensed in pens.

Calves are started on creep feed from six weeks of age, with the aim of finishing everything as quickly as possible.

“Calves get as much as possible as early as possible to get them gone, because it is like a race against time. If they don’t go by 14 months then they are losing me money.”

Calves are left on their dams for as long as possible to reduce problems at calving.

“I try to wean at nine months of age so I have only just weaned February and March calves.

“I want the cow to keep feeding the calf at foot and not the one inside because it will get too big.”

At housing youngstock has their backs clipped to prevent sweating and post-weaning calves are housed in a straw shed. They are fed ad-lib wheat straw and the same concentrate ration [from weaning] through automated feeders.

This is made up of predominantly barley and wheat, and includes biscuit meal, molasses and distillers.

Mr Thomas tracks and records growth rates each month and is targeting a carcass gain of 1kg a day for bulls and 0.75 for heifers.

He believes the key to achieving this is maintaining a healthy herd. The herd is BVD-free and for the last five years he has been vaccinating cows against BVD (bovine viral diarrhoea) and leptospirosis. They also get vaccinated for rotavirus four to eight weeks prior to calving.

“We’ve been blood testing [for Johne’s] for the last two years so I can identify infected cows early and cull them before they go downhill fast to maximise their cull value.”

However, despite his best efforts to evade disease disruption in November eight cows and three calves failed the TB test and a further 10 cows tested positive for Johne’s disease.

“It breaks my heart. Just when you think you’re doing well disease creeps under the wire,” he admits.

He adds: “It is all about risk reduction. There’s no such thing as zero risk.”

Mr Pugh says it is very difficult to spot a cow carrying Johne’s bacteria in the early stages before they show signs of clinical disease, because the disease on average has an incubation period of between two and seven years and many animals will not succumb to disease until they are stressed. So even though Mr Thomas is blood-testing cattle on arrival in attempt to identify infected cattle before they join the herd disease can still go undetected.

At best blood tests may identify 25% of the infected animals in your herd. However, repeated tests will increase reliability, adds Mr Pugh.

“The problem is positive cows are positive and negative means you potentially couldn’t find it on the day.

“A negative test doesn’t mean animals are clear of infection. But repeated annual testing mean as animals get closer to the time of breakdown we will identify them and this allows us to make a decision about their future within the herd.

“Look at the status of pregnant animals. Look at if she has lost time or if her calf weaning weight is low. If she is in good condition and has calved at the start of the calving block then calve her, but if her performance starts to drop sell her to maximise your barren price.”

As all youngstock goes to slaughter the onus is on reducing Johne’s among breeding cows and bulls.

“The idea is to cull within 12 months when they are dry. This gives me the opportunity to cull the cows before they drop in value.

“I’ll keep in calf cows and let them calve, but I have a couple that are barren which won’t go back to the bull,” says Mr Thomas.

It is estimated that 50% of all dairy herds are Johne’s infected and with this in mind Mr Thomas is only too aware that because of his sourcing policy finding replacements is going to become even more difficult.

“You don’t see quality heifers very often, so you can only buy them when you see them.

“A lot of dairy farmers are trying to expand and are breeding more replacements so it is getting hard to source them,” says Mr Thomas.

But to reduce risk of buying in Johne’s-infected heifers Mr Thomas says he will isolate and blood test animals on arrival and run them separate with one bull.

However, TB is a lot harder to control.

“The challenge buying from an endemic area is the animals coming into the herd are a risk, but inherently the disease is endemic in the wildlife,” notes Mr Pugh.

Aside from tightening up disease protocols by conducting post movement tests 60 days after arrival, being in a hotspot area for bTB means the farm is at high risk of disease.

He believes without drastic action to reduce bTB levels it will drive beef producers out of business.

“Tb is endemic in cattle breeding areas and people lose heart. It is soul-destroying.”