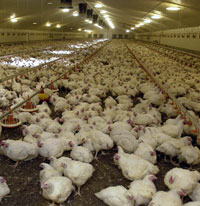 DEFRA has today (26 January) launched its consultation with the poultry sector on the implementation of the EU broiler welfare directive.

The new European rules for the first time set down a legal baseline for all producers across the EU, including those who are not within any voluntary assurance schemes.

But unlike previous welfare rules, these not only concentrate on the welfare inputs, such as stocking density and lighting levels, but also on the outcomes with flocks routinely monitored at abattoirs for signs of poor welfare and acted upon.

Official vets will check birds for any signs that indicate a welfare problem on the farm. If it is suspected that welfare is being compromised, the producer will be asked to take remedial action and set improvement targets, which will be followed up by the local animal health officer.

DEFRA minister Jane Kennedy said: “These new EU rules are a welcome improvement on the limited conditions previously applied to the welfare of chickens raised for meat. From now on, we will be looking at what really matters, which is the overall welfare of the bird itself.

“The fact is that many factors contribute to high welfare standards, and that’s what we’re focusing on – better standards for all birds across Europe.”

She stressed that: “For most English producers, the new requirements simply build on systems that are already in place and working well.”

The EU measures also include new limits for ammonia and carbon dioxide and standards for temperature, humidity and maximum stocking density, as well as clear requirements for industry training.

But some elements of the new rules have received industry criticism, particularly lighting intensity.


Animal health and the Meat Hygiene Service will play a central role in implementing the new regulations.

They are due to come into force in June 2010 and cover all chicken meat production holdings with more than 500 birds. They do not apply to holdings with only breeding stocks of meat chickens, hatcheries, extensive indoor, free-range or organic chickens.

The deadline for comments is 20 April, more information can be found on the DEFRA website.