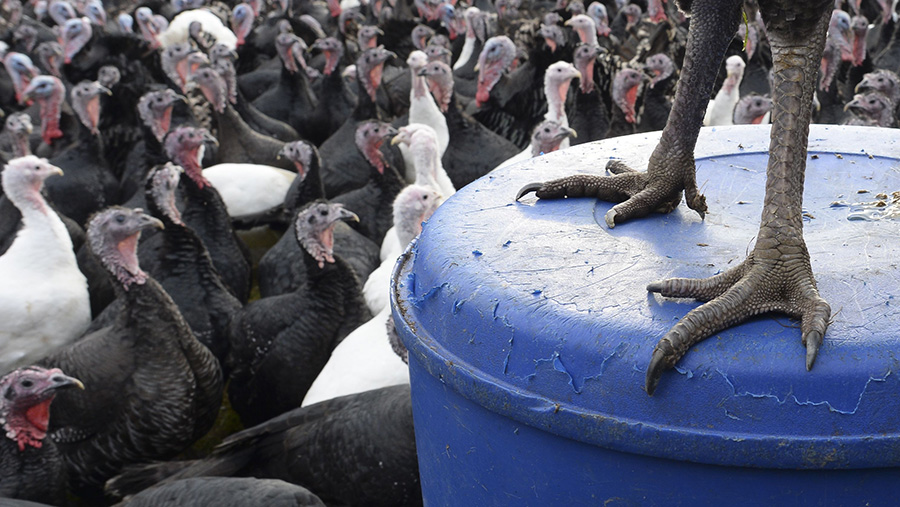 As science advances, it isn’t long before new thinking trickles down to conventional production, where it can benefit bird welfare, improve performance and save farmers money.

Poultry World rounds up some of the latest findings from top research institutes around the world.

The turkey industry needs to continuously review how birds are fed in order to exploit their improving genetic potential and deliver maximum profits, according to Marcus Kenny, head of global nutrition services at Aviagen.

Dietary nutrient density should no longer be considered a fixed constraint, he said, but rather one dependent on changes in economic measures, such as profit a kilo of breastmeat.

Breastmeat yield is key to profitability – it makes up about 25% of the turkey’s weight but between 60% and 70% of the income.

Dr Kenny showed how feeding to support growth and the rapid attainment of maturity lead to optimum development of the breast muscle.

This requires higher levels of both protein and amino acids than are needed for growth, and the right balance of individual amino acids is also different for breastmeat yield from growth.

Nutritionists need to choose quality raw materials and understand how they work together to ensure the nutrient requirements of the birds are met, and that the bird’s gut and immune system remain in balance and healthy.

In order to exploit the genetic potential of the bird, management practices – including stocking densities, ventilation and feed management – will also benefit from regular review.

Among welfare concerns in the turkey sector is foot-pad dermatitis (FPD), a condition that causes inflammation and ulcers on the under-surface of the toes and sole.

It causes the bird pain or discomfort, and serious cases may lead to hunger and thirst as the animal is unable or unwilling to get up to reach feed and water.

FPD also increases the risks of secondary infections and leg problems, and there may be economic consequences as growth and flock uniformity are affected, and there are more downgrades at the plant.

Teun Veldkamp of Wageningen University Research in the Netherlands explained that FPD is a multifactorial condition often linked to wet litter, and nutrition can affect litter condition.

He showed that the risk of FPD in growing turkeys can be reduced by feeding a lower-protein diet or one containing a mixture of proteins rather than just soya bean meal. There was, however, a trade-off in terms of slightly reduced performance.

They also compared diets based on soya bean meal with ones containing a mix of maize gluten meal, peas, potato protein, rapeseed meal and sunflower meal.

Soya bean meal contains large amounts of potassium, which gives the diet a high positive charge and this is thought to encourage the birds to drink more and produce wetter droppings that contribute to wet litter.

Protein in the mix

The mixed protein diet, on the other hand, offers a more even balance between the positive and negative electrolytes and thus helps maintain dry litter conditions for longer. These dietary treatments were tested on two strains of turkeys from 0-134 days of age.

Although there was an advantage to the higher-protein diet over the first 28 days, final bodyweight was not significantly affected by the crude protein level.

Comparing the two protein sources, turkeys fed the mixed proteins had a significantly lower feed intake and bodyweight over the 28-134 days-of-age period, and a lower final bodyweight.

There was no difference in feed conversion efficiency. The litter was drier in pens with turkeys fed on the mixed protein diet, and there was less FPD than the birds receiving the soy-based diet.

Mortality was not affected by protein level or source, and there was no significant differences between the two turkey strains in terms of overall performance, litter quality or FPD score.

It has been generally assumed that the turkey’s lighting requirements are similar to those of chicken, but Karen Schwean-Lardner of the University of Saskatchewan in Canada has found this is not necessarily the case.

She presented her results with both species reared under four different lighting programmes that offered 14, 17, 20 or 23 hours of light in each 24-hour period from 10 days of age.

By the end of the trial period at 18 weeks of age, each step increase in the hours of light decreased the bodyweight of the toms but the effects on the hens was minimal.

Feed conversion efficiency, on the other hand, was significantly better for the hens as they received each step up in light-hours. The same trend was seen for the toms but the differences were not significant.

The Saskatchewan work also showed that mortality was higher in turkeys with the 23-hour light period, and the gait scores were inferior, especially for the toms, compared with the other treatments with a longer dark period.

The longest period of light appeared to make the turkeys less active and upset their natural daily rhythm, as well as causing more eye problems, including cataracts.

Dr Schwean-Lardner said that it is common practice in many countries to rear turkeys with just one hour of darkness in 24, and that her results suggests these conditions should be reconsidered.

The best choice of hours of daylight for turkeys depends on gender and final market age, she added.

Current standards from Quality British Turkeys and the Red Tractor farm assurance scheme in the UK require growing turkeys to receive at least eight hours of darkness and seven hours of light during any 24-hour period, conditions that appear to be appropriate for both good performance and health in growing turkeys.

The birds see very well in daylight, and they are sensitive to the blue-green end of the light spectrum.

However, many artificial light sources used for poultry houses – such as incandescent, fluorescent and compact fluorescent lamps (CFLs) – provide white light and have other drawbacks that means they do not emit very suitable light for turkeys.

The new light-emitting diodes (LEDs), on the other hand, emit light across a wider spectrum, which suits the birds better, and they are becoming more affordable, Mr West stressed.

Due to the differences in perception of light between people and poultry, he called for a standardised system to define the most appropriate light for the different farm animal species.

While the impacts of high-pathogenic avian influenza in the US in 2015 were nothing short of catastrophic, they did offer the opportunity to learn some vital lessons for the future.

The importance of enhanced biosecurity, rapid early detection and prompt depopulation are already known to be vital to control the disease spread. Less well known is an awareness of setting sensitive triggers for self-quarantine before infection is confirmed.

Control of the outbreaks was more effective when the industry communicated openly about the challenges it was facing.

In the UK, the Animal and Plant Health Agency (Apha) has been working to understand the avian flu virus better.

She said control and prevention strategies for AI must be as robust as possible given that a large proportion of turkeys in the UK have access to outdoors, where maintaining biosecurity is so challenging.

The consequences of outbreaks on profitability, trade and bird welfare can potentially be catastrophic.

This report is from the recent Turkey Science and Production Conference, held at Carden Park Hotel, Chester.