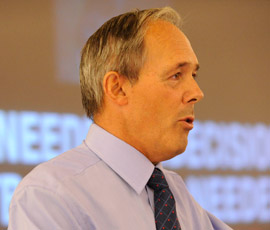 The wife of a dairy farmer has spoken out after anti-badger cull activists bombarded her with threatening emails, letters and text messages.

The wife of Jan Rowe, a dairy farmer and NFU Gloucestershire spokesman, said animal rights extremists have been sending emails to her private account, threatening to “wreak havoc” against her farm businesses.

Her private email account is being flooded with 200 emails a day with offers of loans from businesses based in the USA. The same companies have been following up email offers with telephone calls to her business from sales agents in the US.

Mrs Rowe believes she is being targeted because her husband is a nominal director of GlosCon, a company that will carry out the culling. However, his farm is not involved.

“There is no culling going on anywhere near I live. The government has granted the cull to work alongside all the other systems that they are trying to put in place, like vaccinations. It is just about wildlife management,” said Mrs Rowe.

“But because my husband works for DEFRA, I am being targeted. I have been sent emails saying: ‘Shame on you, how could you do this?’

“I am not interested in badgers and everything that is going on over the badger cull.”

Mrs Rowe claimed members from a well-known animal rights extremist group have been targeting her and her farm businesses.

“Someone has been flooding my email system with emails. He has put my website on the US government website,” she said. “We have been getting 200 emails a day arriving in the middle of the day offering loans and other products to buy.

“Companies have been ringing us from the US to say they have received a website email from us enquiring about items that they sell. The phone has been very busy, but each time I have had to explain what has been going on.

“This is harassment but there is protection from this type of activity under the Harassment Act. I am sure that the police will act soon.”

Mrs Rowe is also concerned for the welfare of family members.

“We have got children and grandchildren. The police have asked us to take precautions, but they are looking after us,” she added.

Phil Hudson, head of food and farming at the NFU, said: “We know that this is an emotive subject, it is for farmers too, and I understand that some of these people do not agree with this badger control programme.

“However, we cannot condone any action that is illegal nor leaves farmers, and in some cases their families, intimidated or threatened. The programme has been through all legal channels and everyone involved is acting within the law.

“We realise that there are different views on how to tackle this issue, but we honestly believe that everyone should agree that the main goal is to ensure we have a healthy countryside, with healthy cattle and healthy badgers.”

A Gloucestershire Police spokesman said: “We are investigating a complaint of harassment and malicious communications towards a land owner in Gloucestershire.

“Gloucestershire Police will enable peaceful protest, however crimes such as harassment and intimidation will not be tolerated and we will take the appropriate action against those responsible.”