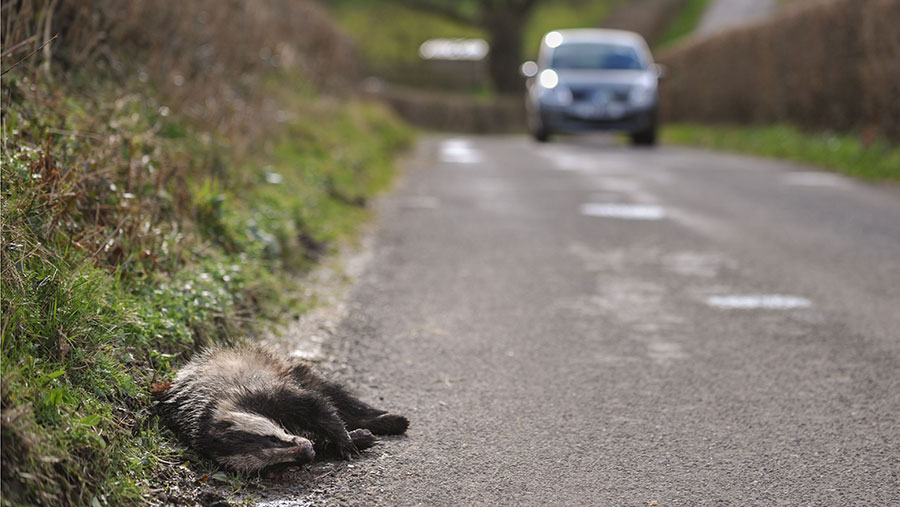 One in five roadkill badgers on the edge area of the cattle TB epidemic in England tested positive for the disease as part of a survey co-ordinated by farmers.

The survey was carried out on dead badgers collected in Cheshire over 12 months from February 2014 through a local stakeholder TB Group, which included farmers, wildlife groups and vets.

Scientists from the universities of Nottingham, Liverpool and Lancaster tested the carcasses for Mycobacterium bovis – the bacteria that causes bovine TB – and found 20 out of the 94 (21%) were infected.

The strain of M bovis found in Cheshire badgers – SB0129 or genotype 25 – was the same as that found in cattle herds at a county scale.

The results of the study – the first to test for bovine TB in badgers on the edge of the cattle TB epidemic in England – were published in the journal Scientific Reports on Thursday (6 December).

Lead author Malcolm Bennett, professor of zoonotic and emerging diseases at Nottingham University, said there was “general agreement” that in endemic areas, such as the South West, the disease can be transmitted among and between cattle and badgers.

But while these findings strongly suggest both badgers and cattle were part of the same geographically expanding epidemic in Cheshire, the direction of any transmission between these two species and the drivers of this expansion could not be determined from this study.

Whole genome sequencing and comparison of any geographically related isolates from cattle and badgers might enable better understanding of any interspecies transmission, the report states.

Previous cattle outbreaks in Cheshire were thought to be largely the result of the importation of cattle from endemic areas further south.

Since 2010, however, more frequent outbreaks have been reported in herds, particularly in south-eastern Cheshire, which by 2013 was on the northernmost edge of the endemic “high-risk area. This persistence led to the suggestion badgers might be involved.

The results of cattle TB testing in Cheshire over the same period as the badger study were compared with the results of testing badgers. In total, there were 2611 herd-level tests at 1,552 cattle holdings in Cheshire in 2014.

Defra expanded the badger cull to part of Cheshire in 2017 as part of efforts to curb bovine TB.

It concluded there is evidence of TB transmission “to and from badgers and cattle”. But the report states culling badgers would have only a “modest effect” in reducing cattle TB.