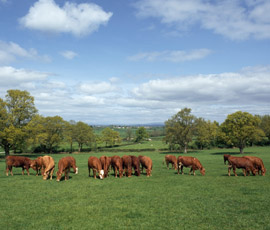 Bovine tuberculosis has been discovered in cows grazing on common land in West Berkshire amid fears the disease is “ravaging” herds in the county.

The disease has been confirmed in three of 80 or so cattle on Greenham and Crookham Commons.

As a result, movement of cattle on and off the commons has been restricted. Commoners with grazing rights have been informed.

“Bovine TB is costing this country dear. Cost to the taxpayer is set to soon top £1bn. Thousands of infected cattle are being killed (28,000 last year). In addition, we are seeing sick wildlife and increasing evidence from organisations such as the Rural Stress Network, of the stress is causing sick farmers.”

Mr Benyon, MP for Newbury, added that he supported government plans for a badger cull as part of DEFRA’s TB eradication programme.

“No country with TB endemic in its cattle has successfully tackled this disease without addressing the reservoir of the disease in wildlife,” he explained.

“We only need to look at Ireland, where they are making significant progress in dealing with the disease by restricting the movement of cattle, alongside reducing the badger population.

“One MP said the government is being “genocidal” towards badgers. Ridiculous. We want healthy badgers and healthy cattle. The culls will remove around 10% of the numbers of badgers killed annually on our roads,” he said.

“No-one wants to kill badgers, least of all me, but I fear that if we don’t, bovine TB will destroy stock farming and migrate into other wildlife. This will change the face of our countryside forever.”

The government is putting a large amount of funding into research into vaccines. An effective and legal cattle vaccine is still at least 10 years away, he added.

West Berkshire Council, which manages the commons, is reassuring members of the public who enjoy the commons for recreation, that they can continue to do so.

“Public Health England has confirmed that the risk of humans contracting bovine TB is negligible, not least because it is actually a different strain from the TB that can affect humans,” said a council spokesman.