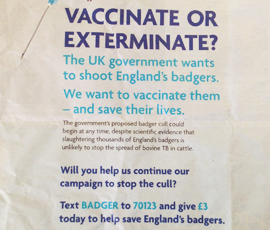 DEFRA has criticised the RSPCA for placing a full page advert in a national newspaper suggesting the government will “exterminate” badgers in the pilot culls.

The advert,  which appeared in the Metro newspaper for a second time on Monday (23 June), claims the government’s badger cull pilots to help control TB will “exterminate” badgers in England. It pictures a bullet alongside a needle and asks: “Vaccinate or exterminate?”

It continues: “The UK government wants to shoot England’s badgers. We want to vaccinate them – and save their lives.”

The ad, which was published by Metro for free, urges readers to help the charity continue its campaign to stop the cull by donating £3.

It has already drawn 80 complaints to the Adverttising Standards Authority. A spokeswoman for the authority said it was assessing the complaints it had received, but had not yet made a descion on whether to launch an investigation.

Writing on its “Tackling Bovine TB” blog, DEFRA contested the claims made in the ad, labelling it “incorrect” and “misleading”.

“There is no risk to England’s badger population,” DEFRA writes on the blog. “As we have always made clear, culls are being piloted this summer in two areas to check the humaneness, effectiveness and safety of controlled shooting as a method to reduce badger populations.

“Targets have been set in the two areas based on robust population estimates to ensure that badgers will not be wiped out from the pilot areas. Outside of the two pilot areas, no badgers will be culled.”

DEFRA also accused the RSPCA of incorrectly claiming in the ad that “scientific evidence” showed culling badgers was “unlikely to stop the spread of bovine TB”.

“Based on results from the Randomised Badger Culling Trials it has been estimated that culling more than 150sq km area will lead to an average reduction in new cases of TB of around 16% over nine years, relative to a similar unculled area,” DEFRA says.

“This is a significant reduction that will help us tip the balance and start to reverse the spread of TB when used alongside our other TB control measures.”

The ad has sparked a furious debate on Twitter, with people speaking out for and against its publication.

DEFRA junior minister and Newbury MP Richard Benyon tweeted: “What a disgrace for an organisation like RSPCA to run such an inaccurate advert on gov’s anti-bovine TB strategy.”

Queen guitarist Brian May, an outspoken critic of the culls, hit back, saying: “Mr Benyon, your attack on the RSPCA is a disgrace. Scandalous that the govt is misleading the public on the badger cull.”

The RSPCA said: “The word “exterminate” accurately describes what will happen to in excess of 70% of the badgers in the pilot cull areas – and beyond if the disastrous policy is rolled out.

“We sympathise with farmers over this devastating disease, but share the views of Professor Lord Krebs and other leading scientific experts that a cull would be of little help in eradicating bovine TB in cattle and could even make it worse in some areas.

“We stand ready to work with the farming community to deliver more effective alternatives including the vaccination of both badgers and cattle and improved biosecurity.”

Six-week pilot culls in west Somerset and west Gloucestershire are due to start any time this summer as part of government plans to tackle bovine TB. A target has been set for marksmen to kill at least 70% of badgers in each zone.

Bovine TB led to the slaughter of 38,000 cattle in the UK last year.