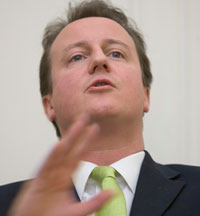 Mr Cameron told voters in Plymouth, Devon, that he was prepared to support a targeted cull to prevent badgers spreading TB to cattle and wildlife.

He said that, if the Conservatives won the General Election, the party would form a TB eradication plan similar to the Welsh Assembly Government’s programme.

He said he was prepared to sanction the selective trapping and killing of badgers to combat the disease, according to a report in the Daily Telegraph.