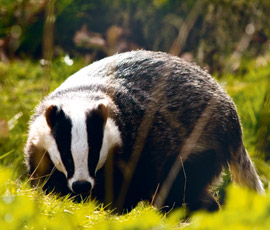 Police are hunting vandals who daubed sick graffiti on the walls of an NFU Mutual regional office.

The words “Badger Killers” and NFU Murerin Scum” [sic] were painted on the walls of the NFU Wotton-under-Edge branch in Gloucestershire.

The graffiti was written on the exterior of the cream walls in black spray paint.

“At around 2am on Monday, 27 February an officer on patrol in Wotton-under-Edge discovered that the words ‘Badger Killers’ had been sprayed on to a building on the high street in black paint,” said a spokesman for Gloucestershire police.

“It’s thought the damage was caused between midnight and 2am.”

Gloucestershire police said they were treating the incident of criminal damage seriously and they have urged anyone who witnessed the crime or saw any suspicious activity in the area to contact them.

An NFU spokesman said that they were linking the attack to the union’s pro-cull stance, albeit an attack on a commercial building that has no connection with DEFRA’s two proposed pilot culls in England later this year.

“This is a vain attempt at intimidation, but this business has nothing to do with the culls. It is not in the cull areas and it is trading as an office agency,” said the spokesman.

“It shows a complete absence of any rather, coherent and factual argument – it’s tantamount to an admission that the debate is lost.

The spokesman added: “In Gloucestershire, around 25% of all the herds are affected with TB. It’s an absolutely horrendous situation that cannot be allowed to continue – particularly from an animal welfare point of view.

“We have tried to tackle the disease by dealing with cattle measures, but nowhere in the world is that successful.

“The disease has been allowed to get out of hand and this is the consequence of years of political fudging and inaction.”


Read more about the proposed culls or have your say on our forum.