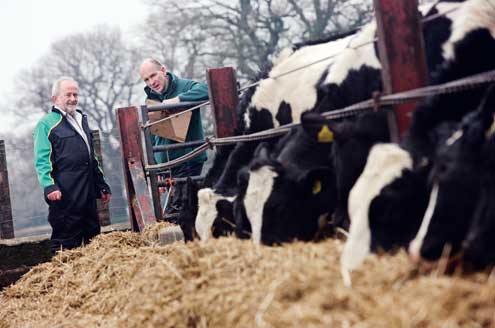 Last year alone, from January to November 35,000 cattle were slaughtered in Great Britain as a result of bovine TB.

At an individual farm level TB costs £34,000 – of which it is estimated £12,000 falls to the farmer. But Monmouthshire dairy farmer John Young paid a far higher price, after his herd of 250 pedigree Holsteins tested positive for the disease in March 2006.

Despite being in a TB hotspot, the herd was closed at the time and biosecurity was tight.

“We didn’t have any contact with neighbouring cattle, because we had the River Usk on one side of the farm and arable fields on the other. There was no nose-to-nose contact with any other cattle,” says Mr Young.

But even the tightest biosecurity protocols couldn’t prevent a badger set from springing up close to the dairy the winter before breakout. Within only a few months the whole herd was placed under restrictions.

For the first year Mr Young tried desperately to rear his own replacements by serving everything to black and white, only too aware of the risks posed by buying in cattle.

But eventually a large spread of in-calf heifers forced him to buy his first batch of cattle.

“The heifers would’ve taken a long time to come into the system, so by January 2007 – nine months after going down with TB – I realised I would have to start buying in replacements or I would’ve risked not meeting our quota,” he explains.

But little did he know his problems were just beginning and he was, in fact, opening his herd up to a whole host of infectious diseases.

His first purchase was a group of 40 IBR- and BVD-vaccinated pedigree cows and heifers from the same vendor.

“I was careful not to buy a lot of animals from different places, mainly because I knew it would increase disease threat,” he admits.

However, soon after – and despite precautions – a cow died. Post-mortem examinations by Mr Young’s vet Rob Smith revealed the cow had suffered from IBR.

This was soon followed by a 15% drop in milk production, a number of abortions, high temperatures and fever, and a further five fatalities.

Although previous bulk milk samples, done by the Scottish Agricultural College herd health scheme in 2002, found high antibodies for the disease, no clinical cases had been observed within the herd.

Mr Smith, from XL Vets group Farm First Vets, in Abergavenny, believes it is highly likely a new, and more virulent strain of IBR was brought into the herd by purchased cattle.

“If cattle are vaccinated that says to me the herd of origin is likely to have had a problem with disease and although they’re vaccinated, they can still be carriers,” he warns.

Despite playing it “by the book” – ensuring all purchases were vaccinated against endemic diseases, isolating animals for 28 days and disease screening as a precaution – the disease crept under the wire once again.

The farm had previously had a problem with BVD, but by 2008 they thought they’d seen the last of it. However, this wasn’t to be, and in 2010 a recurrence was confirmed at the farm.

“When it was first diagnosed it caused fertility issues, such as re-absorptions, and then PIs [persistently infected animals] started to appear. With repeated blood testing we eventually managed to eradicate it in 2008,” explains Mr Smith.

Mr Smith says this time the likely source of disease was a “Trojan horse” – a healthy looking bought-in cow carrying an infected calf.

“The incoming pregnant cow would have tested positive for antibodies to the virus and looked completely normal. The calf inside her would have been a PI, because the cow was infected during the middle trimester of her pregnancy.

“The calf should’ve been tested after it was born, but it fell through the net. If you have a steady stream of cows coming in, even with the best will in the world a calf’s blood test can be forgotten. Unfortunately, this is often the very animal carrying the disease.”

Historically, Johne’s prevalence at Neuadd farm was non-existent. Blood and faeces samples taken in 2007, as part of a DEFRA-funded initiative with Bristol University, all came back negative and no clinical cases had been diagnosed.

However, by August 2009, the first clinical case of the disease was discovered in a recently calved two-year-old heifer.

Again, a bought-in animal was a likely source. “We were pooling the colostrum, but we weren’t too worried about it, because we had a clear test. So, cows bought in may well have introduced Johne’s and unknown to us, despite quarantine testing purchased animals, we were feeding infected milk back to the calves,” says Mr Smith.

At its peak incidence six animals tested positive for the disease, so the farm started testing milk for Johne’s soon after in an attempt to stamp out the problem.

But TB was exacerbating the problem. Firstly the interpretation of Johne’s results was complicated by 60-day tuberculin tests.

“At first we were milk testing for Johne’s every month, but it got really confusing, as tests were repeatedly throwing up false positive due to interference from the tuberculin used in TB tests,” says Mr Smith.

“To get ahead of the disease what Mr Young needed to do was cull out the positive cows hard, but he couldn’t do that, because he was restricted to what he could cull because he was loosing so many animals to TB.”

Fertility was also beginning to falter. In 2006 calving index stood at 404 days. By 2009 – three years into the outbreak – calving index had risen to 411 days. As a result, the business was hemorrhaging thousands of pounds.

Determined to do something about it, Mr Young set about introducing management protocols to tackle disease and reduce spread.

The herd is now milk tested every quarter for Johne’s, which increases the chance of picking up positive cases sooner and reduces the risk of disease being spread.

Infected cows are calved separately to the rest of the herd and calves are snatched from these freshly calved cows and are given colostrum from cows testing negative to Johne’s. After this, all replacements are fed on milk powder.

Johne’s-positive animals are AI’d to British Blue bulls and the calves are sold for slaughter.

As part of the farm’s BVD control, yearling heifers are screened annually for any evidence that BVD is circulating in the milking herd.

As a precaution Mr Young now vaccinates all animals against IBR before they calve and gives a booster to all breeding animals annually.

“The most important thing is getting the heifers vaccinated before they calve and come into the herd, because this means they have developed immunity to the disease before they mix with the milking herd,” says Mr Smith.

After loosing no fewer than 109 animals to TB the herd finally went clear last year. The result has been a significant step forward for the family in helping to get on top of other diseases.

“Now we are in a situation where we can afford to get rid of cows we shouldn’t have kept,” says Mr Young.

As a result BVD has been eradicated and IBR is under control. Although some cows are testing positive for Johne’s, Mr Young hopes that continued management practices will reduce the prevalence.

But Mr Smith warns that while farmers can do everything in their power to ensure they are buying from higher health herds, there is never a guarantee they will be disease-free.

“If you are a closed herd, think very carefully about if you can manage without buying cattle in and if you can’t, test as thoroughly as you can for disease and follow strict biosecurity protocols,” he advises.

Meanwhile, the threat of TB at Neuadd farm remains real and perennial.

“TB is a very real risk, because it’s a significant issue for farms in this area,” says Mr Smith.

If the farm was to go down again Mr Smith says it would be a “real blow” for the business while they struggle to overcome the problems they’ve encountered.

Mr Young says the current situation with TB in Wales is frustrating. “I’m very frustrated. We are testing animals all the time, while wildlife reservoirs are under no restrictions whatsoever.”

But until a sustainable outcome is agreed by the Welsh Assembly Government to reduce TB in both cattle and wildlife species, Mr Young is left on a knife’s edge.

“All I can do is continue to test and pray we don’t go down with TB again, because that would set us back considerably.”