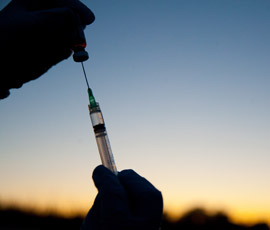 Vaccination is expensive, offers no guarantee of protection and will provide little benefit in the immediate future in the fight against bovine TB, say MPs.

In a report published by the Environment, Food and Rural Affairs (EFRA) committee on Wednesday (5 June), MPs warned that vaccination was “no magic bullet” in the search for a solution to the disease.

Later today (5 June) MPs will discuss the forthcoming badger cull after Labour called a parliamentary debate on the policy. Badgers are known to spread TB and the government is adamant that a cull is necessary to stop the disease spreading further, or else the bill for taxpayers could rise to £1bn during the next decade.

“We should use every tool to combat this disease, but vaccination alone will not, at least in the short term, provide a complete solution. Vaccines have no effect on already infected animals, offer a range of protection to those that aren’t infected, and will be expensive to deploy.”

Successive governments have invested more than £43m in vaccine research and development since 1994. By the end of the current spending review period, DEFRA will have spent a further £15m, the report said.

Deployment of the injectable badger vaccine will cost an estimated £2,000-£4,000/sq km. The cattle vaccine is expected to cost £5-6 a dose and the DIVA test – which differentiates between infected and vaccinated cattle – costs £25, in addition to existing testing costs.

Ms McIntosh said: “The government must do all it can to speed up progress without compromising collection of the robust field data needed to satisfy the Veterinary Medicines Directorate, European Commission and World Organisation for Animal Health.”

Small-scale studies to test the efficacy of the vaccine in cattle in Ethiopia and Mexico have shown the protective effect to be between 56-68%.

However, a vaccine offering this level of protection won’t immediately solve the problems of bovine TB in the cattle industry, MPs warned.

“This vaccine will be no magic bullet,” said Ms McIntosh. “In the short term, use of the vaccine will impose an additional cost and may increase the administrative and testing burdens farmers already face.”

An injectable BCG vaccine for badgers has been available for use since March 2010. But it does not confer complete protection and has no discernible effect on animals already infected with TB, the report says.

“There are many unknowns to overcome if it is to be viable, and it will be expensive,” said Ms McIntosh.

An oral baited vaccine for badgers that can be laid at setts, however, was likely to be cheaper and more practical than an injectable version for vaccinating large numbers of badgers.

However, development of an oral vaccine – along with a suitable bait and a strategy for deployment – poses many challenges that will take several years to resolve.

“Once developed, an oral vaccine is unlikely to provide an immediate or complete solution,” said Ms McIntosh. “If herd immunity can be achieved, then it will still take many years, as well as considerable effort and expense.”

The UK currently relies on a skin test that could miss one in four infected cows. Liver fluke, Johne’s disease and even pregnancy may affect the result of a skin test. If other, more sensitive, tests exist, MPs argued these should also be employed.

A variety of ongoing research projects could make a real difference to the eradication of bovine TB in the UK, the report found.

These include: PCR testing to determine infected badger setts, a new type of test to identify bovine TB in cattle after slaughter and work on a vaccine that does not interfere with the skin test.

In conclusion, the report said: “Vaccination is not a panacea that will solve overnight the problem of bovine TB in cattle and badgers. “The effect of the available injectable vaccine for badgers is unproven in the field, an oral vaccine for badgers is several years away and it may be 10 years before a cattle vaccine is available for use – and at present we do not know how effective such a vaccine might be under UK conditions.”

All systems go for badger cull