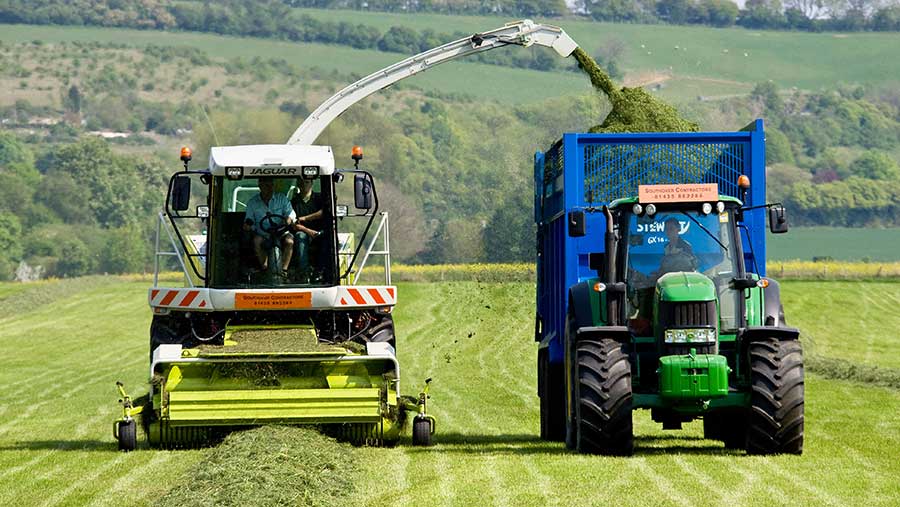 Farmers taking first-cut silage could be at a high risk of slurry contamination and poor fermentation of grass crops this year, with the exceptionally wet weather shortening the window between slurry spreading and harvest.

Grass should not be cut for a minimum of six to eight weeks after surface spreading to allow sufficient time for harmful clostridia bacteria to drop to safe levels for a good silage fermentation.

But some farmers who have been unable to get slurry out may have to cut before this to prevent grass going to head and delaying subsequent harvests.

Even though slurry application has been delayed, heading dates are largely unchanged and most farms will need to take a first cut by the second week of May to achieve the best quality, depending on the grass varieties used and farm location, says Mr Davies.

However, he says some are cutting even earlier than this, adding: “There are farmers in Cheshire who were cutting yesterday [19 April], which concerns me.”

He believes many farmers are using splash plate spreaders to apply slurry, which he says could heighten contamination levels because the slurry sits on top of the grass.

Bacterial contamination is reduced with injection and trailing shoe applications because it is applied below ground. However, nitrogen residuals could still be high, regardless of method, Mr Davies warns.

The effect on silage quality

When you have high nitrogen and bacteria in your grass, irrespective of source, you have low sugar levels.

This cuts short the pH decline, so clostridia bacteria isn’t killed off. They then grow and use lactic acid as an energy source to produce butyric acid (secondary fermentation), which reduces silage quality.

Why use chemical additives

Mr Davies says while he wouldn’t recommend cutting earlier than six weeks after the slurry application, chemical additives would be beneficial for farmers who don’t have a choice.

“Biological products need sugar to carry out fermentation. The only additive that will make it feedable is a chemical one. It directly acidifies it so you don’t need as much sugar,” he explains.

“It’s a better option than biological products under potential difficult-to-ensile conditions and you will not cause a delay to harvest throughout the season.

“The better option would be to not spread fertiliser, but so many people have slurry tanks full to the brim and farmers are desperate.”

What if you haven’t spread slurry yet?

Kelvin Cave of Kelvin Cave, which supplies inoculants, additives and preservatives, says waiting until ground conditions permit fertiliser or slurry to be spread could waste resources. He instead suggests farmers take a “light salvage cut” to keep on schedule and maintain grass quality this season.

“The key point to remember is the heading date of grass will remain the same whatever the weather, and grass quality – particularly in terms of D value and metabolisable energy [ME] – will naturally deteriorate after this date.

“It may well be better to cut your losses now, at your usual silage-making time, and take what you can as first cut,” he says.

Mr Cave says it will be a challenging first cut on many farms and agrees biological inoculants would not be able to control issues. Instead he says chemical preservation will be needed.