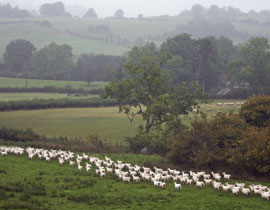 More than 900 hill farmers battling some of the most challenging terrain in England have received critical funding.

The Rural Payments Agency (RPA) said it has paid out more than £2m to beef and sheep farmers eligible for Uplands Transitional Payments (UTP).

Up to last Wednesday (27 March), the government agency said it had made payments to 925 farmers.

This is equivalent to 73% of those eligible for money and more than 67% of the total value of the scheme being paid.

RPA operations director Paul Caldwell said: “This has been a particularly challenging year for farmers and I am pleased that more than 900 hill farmers have already received these vitally needed funds within three weeks of the payments starting.

“Our focus now is to ensure that those who have not yet received their payments are paid as soon as possible.”

Exmoor farmer Robin Milton, chairman of the NFU uplands group, welcomed the payments and said he was pleased that the RPA was finally getting its act together.

“The payments are critical. This year hill farmers have had to deal with poor markets in the autumn, seriously bad weather, high feed prices and more recently, the snow on the hills and subsequent livestock losses,” he added.

The UTP, which succeeds the Hill Farm Allowance, is designed to ensure that those farmers unable to benefit from the Uplands Entry Level Stewardship continue to receive specific uplands support.