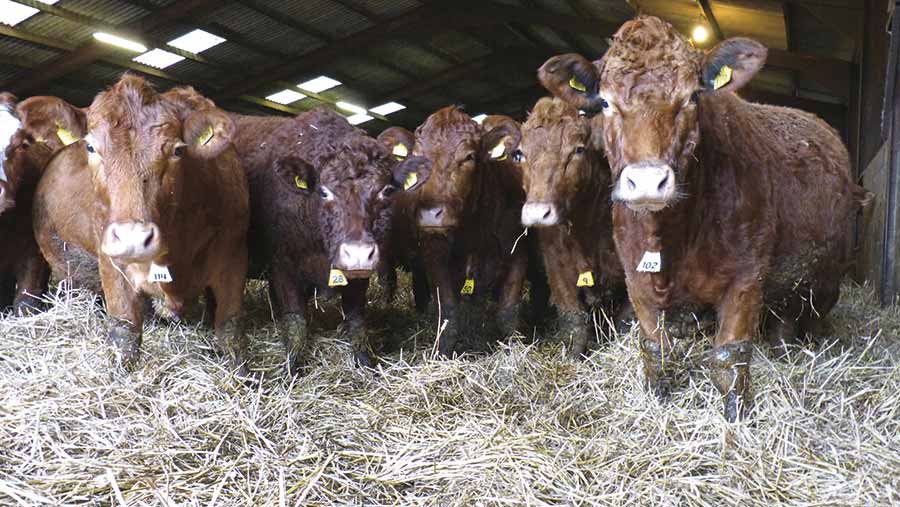 Since buying their first Stabiliser cattle in 2007, the Sheppards have increased their herd size from 70 head to 85, which, with lower calf mortality, should see them 20 calves better off each year.

While the move is still in its infancy, together these productivity increases should boost turnover by £25,000 (£1,250 for every fattened animal).

Further cost savings will be made on a six-week-shorter calving period, with barren rates falling by 6%, and the family estimates they will save £660/year on caesareans.

A fear of a repeat bovine viral diarrhoea (BVD) outbreak and a desire to simplify biosecurity in the bovine tuberculosis high-risk area led the Sheppards to run a closed herd and finish everything at home.

Previously, the Blue cross Holstein calves (heifer calves were bought each autumn and bucket reared) were Limousin-sired and suckled calves were sold at Bishops Castle as stores.

The addition of a finishing shed now allows bulls to be fed home-grown cereal intensively to finish at 13-14 months, while the aim is to finish heifers off grass at 18 months.

“We are getting more cows in calf and we aren’t losing as many calves,” says Tony Sheppard, who farms with his wife Jo, a vet who oversees the farm’s health policy.

“Previously we were seeing three to five barrens and losing three to four calves. This year we bulled 85 and scanned 81 in calf in 10 weeks.”

However, with the fattening shed only in its third year, Tony admits there are still areas in which to improve.

“We are learning all the time about finishing,” he says. “The worry of a bTB failure persuaded me to build a shed. This ends pre-movement testing.”

“We bought in BVD back in 2010,” recalls Tony. “One cow calved a persistently infected [PI] calf, which was put down. The following year we screened the herd and found four PI calves – two died and two amounted to £150 with the barrens.”

However, the herd’s overall herd average weaning percentage of 46.2% is being held back by bigger cows over 750kg weaning calves of 300kg or less, they admit.

Last season’s suckler herd gross margins were £517.60, which when factoring in the new feedlot hits the AHDB average of £616 a cow.

This has lifted suckler performance considerably since 2012-14 when the cow gross margin was £170 against an AHDB Stocktake average of £274.05

Heightley has kept accounts through the Farm Business Survey and Reading University since 2009.

The survey is a free service carried out by a group of institutions, including; the Universities of Cambridge, Newcastle, Nottingham, Reading, Harper Adams and Duchy colleges.

“Our herd is small anyway because we are 40% heifers,” says youngest son Marcus.

“And while they will be bigger in the coming years, we hope they will wean bigger calves too. They are more efficient than the previous crosses we had, which were 100kg heavier.”

Cows are fed ad-lib hay until Christmas after being housed in early November.

Most cows calve indoors and are turned out in mid-April, with the earliest-born calves about four to six weeks old.

Bulls receive the ration from July, while heifers are creep fed two weeks before weaning in October.

“We have never used boluses or pre-calving blocks with the Blue cows or the Stabilisers,” says stockman Stuart Davies. “I just drop six round bales in on Monday, six on Wednesday and 10 on Friday, and that sees them through the weekend.”

The Sheppards say being a closed herd means more attention is paid to heifer rearing from day one.

This is critical for heifers to reach bulling weight (400kg minimum) by 15 months old so they calve at two years.

Now, calving is in a tight 10-week spring block.

Further simplicity is offered by the 14% crude protein home-grown cereal bull ration, which has copper removed to feed late-gestation ewes and ­fattening lambs.

The Sheppards’ home rolling and mixing unit saves £60/t on buying rolled cereal, which across the 150t used annually is worth £9,000.

All concentrates are sourced from Powys Leys. Fattening cattle are given the ration with a 34% CP pellet from weaning, which is then switched to a 30% CP “multi-stock” pellet when the ewes are fed before lambing.

“This works well as bulls are ­getting older and need less ­protein,” says For Farmers nutritionist Guto Lewis, who believes the oats in ration and the live yeast in the product help reduce acid loading.

The dual-purpose ration (54% oats, 26% wheat, 20% pellet) also has copper removed for the sheep, which Mr Lewis says will not be a loss to the cattle for only two months. 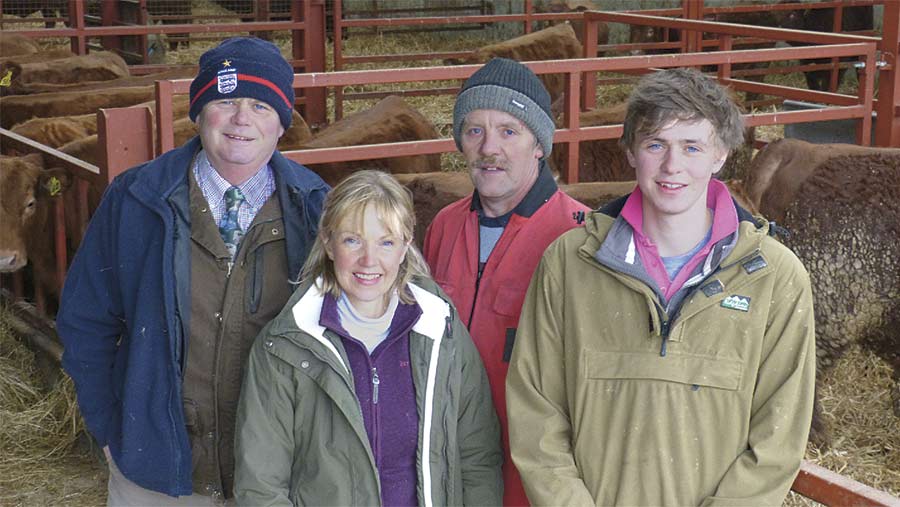 “Oats prevent acidosis, as wheat is more than 60% starch, while oats is in the low 40s. Live yeast scavenges oxygen and this increases rumen pH, helping promote the good bacteria in the rumen. Also, the pellet has rumen-degradable protein, which helps mop up excess starch.

“To improve the ration, bulls could use more wheat, but starch levels are good and bulls are fleshing well. After lambing, an option could be to go 50/50 oats and wheat with pellets.”

Another way the Sheppards are striving to increase performance is through managing the animals’ stress levels.

This includes brisket tags for easy identification and reusable nose flaps at weaning (£2.50/flap), which are both paying dividends.

Furthermore, the stresses of dehorning and castration are avoided by using a polled breed and keeping bulls entire.

“We have used brisket tags for managing cattle since 2002,” says Tony. “They cost about £2, they last longer and fall out far less often than ear tags do.”

Son Alistair says the nose flaps (used on cows and calves at pasture) have worked well in the farm’s first trial weaning with them. He sees weaning as a critical stage.

“Two key periods are calving and weaning,” says Alistair. “We put the nose flaps on the calves for four days – ideally this would have been a week. There was much less stress and noise and the calves settled into the fattening shed quicker this year.”

Prior to weaning, calves are given an IBR marker vaccine and a RSV/PI3 intra-nasal. Breeding stock are given a BVD vaccination before breeding and an annual booster.

Colostrum boosters are given six weeks before calving. All cows, heifers and calves are wormed and fluked with triclabendazole two weeks after housing.