An organic beef farm is capturing an additional 0.4kg a head of daily liveweight gain (DLWG) from yearling cattle at grass since establishing a rotational grazing system.

The cattle at Penrhiw Farm, near Llandysul, Ceredigion, were traditionally set stocked, but Phil Cowcher and his parents, Tom and Eva, were keen to get more performance from grass.

This would enable them to increase their stocking rate and reduce the concentrate requirements of the enterprise.

As a Farming Connect Focus Farm, they embarked on a project to see how much additional liveweight gain could be achieved per hectare from setting up a paddock system with electric fences and moving the cattle to fresh pasture every one or two days.

The Cowchers have invested £3,827 in infrastructure, including electric fencing, a water system and an energiser and receive management advice from James Daniel, of Precision Grazing. 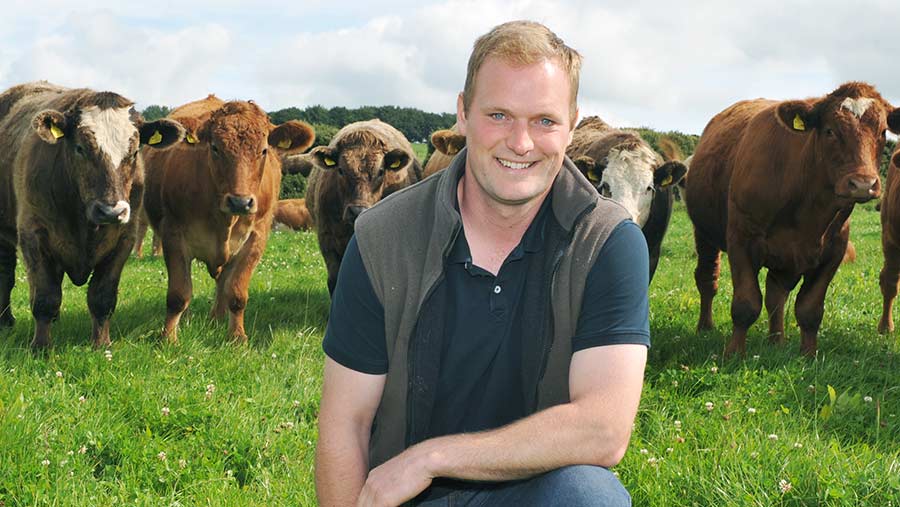 The turnout date for the spring 2016-born cattle was 24 March, on average, with a group of 20 cattle turned out earlier, on 8 March. The cattle weighed 388kg at turnout, on average.

In the first two weeks, the group was moved to a fresh paddock daily because the weather was very wet, but they have since been moved every two days.

Four months into the trial and the Stabiliser and Simmental-cross cattle had grown by an average of 1kg/day compared with the historical farm average of 0.6kg/day under the set stocking system; this equates to a total extra weight gain of 2,592kg over that period.

Phil Cowcher calculates, at the current organic beef price, the additional liveweight gain is worth £6,161. “This means that our original set-up costs have already been paid off 1.6 times,” he says. 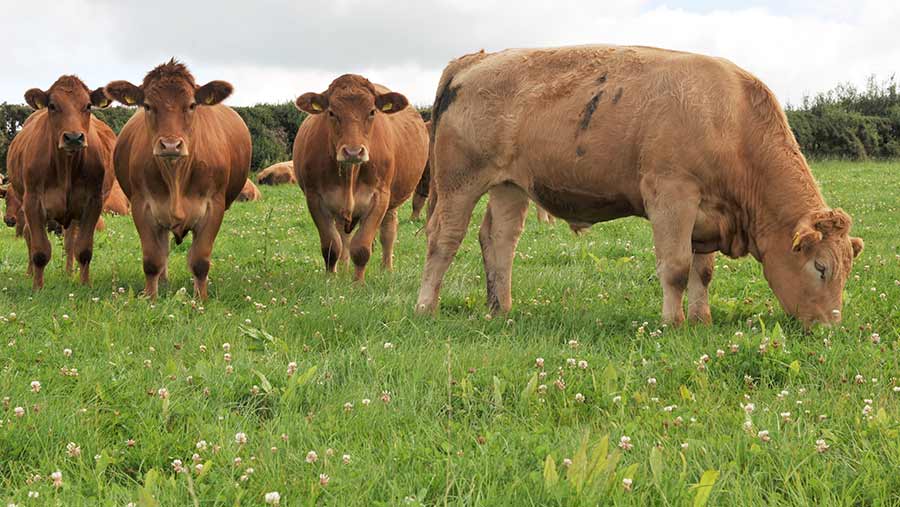 Rotational grazing has allowed him to stock the grazing platform at 4.08 cattle/ha, or 1,909.8kgLW/ha. Under the set stocking system they could only carry 2.1 cattle to the hectare.

The family have been farming organically since 2001, farming 200ha of owned, rented and share-farmed land.

They have been building up cattle numbers, bulling 70 mainly Stabiliser cows and heifers this year compared with 60 last year. A flock of 950 Highlander ewes and ewe lambs are tupped to Highlander and Primera rams.

Based on the results of the Farming Connect trial, they are now planning to roll out rotational grazing across the farm, for both cattle and sheep, and increase their stocking rate.

“Rotational grazing requires more management and a bit more labour for setting up fences, but this is easily offset by huge gains in cattle and grass performance. It gives us much more control of the grass and this is improving quality and use,” says Mr Cowcher.

Cattle were trained within a week to understand the electric fence system. “Cattle are much calmer as they associate people with being moved to fresh pasture,” says Mr Cowcher.

“In previous years, some of the yearling cattle have been challenging to move, but now they behave like dairy cows.

“It is also much more rewarding when cattle are growing well and looking healthy.”

He measures the grass weekly and sends the measurements to Mr Daniel who plans the paddock sizes and the rotation length. Target entry cover height, projected grass growth and average system cover are factored into the calculation.

A limiting factor for rotational grazing can be the provision of water in all paddocks but Mr Cowcher says this was easily overcome by running a water pipe with multiple hydrants over the surface of the fields.

A portable drag trough can then be easily moved along and plugged into these quick-release fittings. 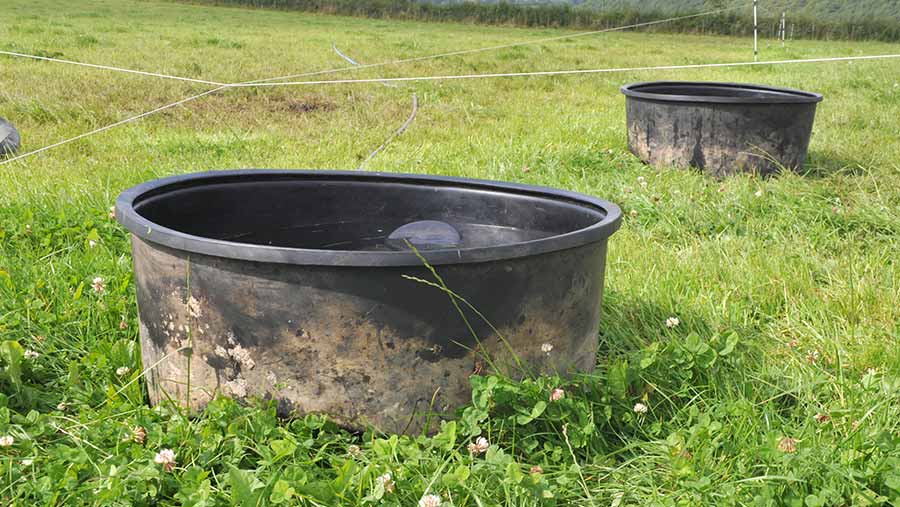 The breeding heifers in the group, which comfortably reached the target bulling weight of 400kg by 15 months are now, post-insemination, following behind the finishing cattle in a “leader-follower” system, where both groups are moved daily.

This method means that the finishing cattle’s intakes are ad-lib to enable them to achieve a minimum target of 1.2kg DLWG over the next two months. Cattle are sold to ABP at 18-19 months at 300kg deadweight.

During the first winter, cows and calves are housed, with calves being introduced to their ration through creep gates, before weaning. The winter ration for the calves consists of home-grown red clover, barley and pea silage and 1.5kg a head a day of home-grown rolled oats.

“In previous years, the majority of cattle were fed concentrates for finishing, but this year we will finish more cattle off grass alone,” says Mr Cowcher.