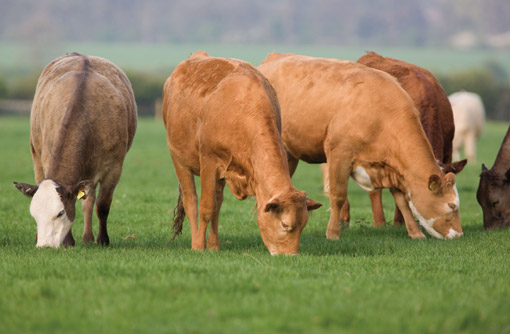 The beef sector may have seen an upturn with strong prices, but profitability – even among the best – is low. Figures from EBLEX suggest the average producer continues to make a loss. Jeremy Hunt speaks to two suckler producers who are focussing on maximising profits

Totting-up the running costs of a suckler cow and the impact those inputs have on how much profit her calf will leave behind is a critical calculation for suckled calf producers looking to improve margins.

Like many suckled calf producers Stephen Lord is looking closely at every aspect of his production costs.

“I think we’re all in the same situation and constantly trying to shave off more costs and yet still produce good-quality cattle as efficiently as possible,” says Mr Lord, farm manager at Gaythorne Hall Farm, Great Asby, near Appleby, where he runs 110 cows predominantly British Blue/Limousin crosses.

But underpinning everything is a commitment to continue to produce top-quality suckled calves. “The aim is to sell calves that people really want to buy. That’s the point at which the income is made, but it’s the culmination of so many different costs and management decisions. These days each part of the system has to be constantly reviewed to see where improvements can be made.

“When we sell calves I want to be able to market a level run of cattle that has instant appeal to buyers; calves with plenty of length and potential, not just with big back-ends. But I still want plenty of muscle without it giving me calving problems,” Mr Lord explains.

The herd calves in a six-week period starting in early May. To keep the calving pattern tight the last 15 cows to calve receive a hormone implant when bulls are turned out in August to try and bring them “forward” and back into the required calving period.

“If we start calving on May 15 every cow that calves a day after that means I have lost a day’s growth in each calf. The aim is to get as many cows calving in the shortest time possible, so calving pattern is something we’re very focused on.”

About 70% of the cows calve over three weeks but any that “slip” and calve in late June or even early July are AI’d twice to try and bring them back within the May calving period.

“It doesn’t work all the time, but this year we’ve managed to get half of last year’s late calvers back to where they should be.”

Although some home-bred heifers are retained most herd replacements are bought-in as year-old heifers, but the type is very important to Mr Lord. Replacements must be a beef-bred mix, predominantly Limousin with a dash of British Blue breeding. They are hand-picked, usually from the autumn suckled calf sales and increasingly from the same people. “We know whose cattle will do the job for us and have the health status we need.”

But some interesting calculations have been undertaken by Mr Lord covering herd replacement costs. “If I spent my annual budget for replacements on heifers with calves at foot, we would only be able to buy a fraction of the cattle we needed and in reality our herd would disappear within seven years, so that’s why we buy yearling heifers. There are wintering costs to consider, but it’s still the best way to do it.”

And as replacements get dearer longevity is becoming an important element of the herd’s bottom-line profits.

“We’ve got several 14-year-old cows that have calved this year and they are still good cows, but we’ll have plenty of cows getting towards 10 years old. So selecting heifer replacements is something we take time over – and any heifer we buy must be good on its legs and feet.”

A close watch is kept on individual cow performance and any whose calves are clearly making below average prices are culled. “Quite often a cow may be calving on the button and seem to be doing OK, but she could actually be underperforming in terms of her ability to earn enough income.”

As part of the management under way to give heifers the best start after calving, a good-quality concentrate is given as a supplementary feed at grass during their first summer. “It keeps the milk on the heifers and helps them maintain good body condition ready to take the bull. We don’t want heifers pulled down in condition and risk not holding to the bull,” says Mr Lord.

But extra feeding at grass – despite the cost of feed – is something being considered for the main herd during the summer.

“We’ve been trying to find a calf creep that sheep can’t get into and it’s not easy. So we’ve thought about trying to get the cows to do more for the calves just by milking better.

“Milk is the cheapest way of getting feed into a calf. We don’t put creep out until the beginning of August so a bit of extra feed for the cows would hopefully make sure we kept milk yield up through the summer.”

“I’ve got to admit I’m cautious about having to buy-in even more feed, but it could be cheaper in the long run than feeding creep earlier.”

Although Mr Lord knows the buyers of the calves produced at Gaythorne Hall want continental crosses he has been prepared to consider the option of changing to composite cows.

“These cows do have some attractive performance figures but again, I have to look towards the point at which this herd generates the income to pay the costs, and my market is for continental crosses.”

The herd runs five Limousin bulls, but while performance figures aren’t a deciding factor, a close interest is maintained in the breed to help with bull selection.

“I follow the breed closely to try and use bulls with breeding that I know something about.”

About two-thirds of the calf crop is sold locally at Kirkby Stephen’s well-known suckled calf sale in May with the rest going as stronger stores in the autumn.

According to Aberdeenshire beef producer Peter Watson the cow has to produce a live calf and one that’s worth as much as possible, but while also keeping a handle on the cost of the cow.

With sons Adam and David, Mr Watson runs almost 400 suckler cows on the family’s 607ha at Darnford, Durris, Banchory. Calves are weaned off cows in October/November and are out wintered on stubble until February.

The herd is switching to homebred Saler cows – already about three-quarters of the herd are Salers – all put to Charolais bulls.

About 120 suckled calves are sold and the rest are finished with 280 cows calving in the spring and 120 in the autumn.

Figures compiled for cow maintenance put costs at a minimum of £500 a year. There’s an additional £50 for depreciation, bull costs are put at £50 and vet and medicine costs at £42. With bank interest taken into account the overall figure a year was £700 a cow by the time her calf is weaned.

“Even bull costs need to be considered,” says Mr Watson. “It depends on how many cows are being served, but we did some calculations that showed a bull costs £760 a year to keep which covered feed, fertility tests, vet and medicines. And depreciation has to be added to that. So on a bull costing 6,000gns and valued at £1,200 to kill after six years, there is a depreciation of £800 a year – you’re quickly up to £2,000 a year a bull.”

Mr Watson says bull costs can be spread the more calves each bull produces, but it’s still a huge amount and a cost not a lot of producers may often consider.

The switch to Salers has been driven primarily by the need for easy calving cows. “We calved 270 this spring and had the vet just once to turn a calf. We assisted about 20, but there was nothing difficult among them. Getting a live calf is absolutely critical for us. Our market is for big cattle and these cows can produce the type of calves we want by the Charolais.”

The Watsons say breeding their own Saler replacements will give them more control – both on the type of cow, the ability to focus on improving female traits and tighter control on herd health.

“The cow is half the business and more needs to be done to help suckled calf producers benefit from maternal traits that are as important as the traits of the sire. Too much is left to the bull when cows with the right traits and breeding could do much more. We’re on an extensive unit and every suckler has to justify her existence.”

The farm’s focus is to produce the highest number of kilos a cow from home grown resources. Charolais-sired steers are finishing at an average 400kg at 644 days; heifers are averaging 352kg at 583 days.

“That’s a performance edge worth £249 and £227 respectively for steers and heifers,” says Mr Watson.