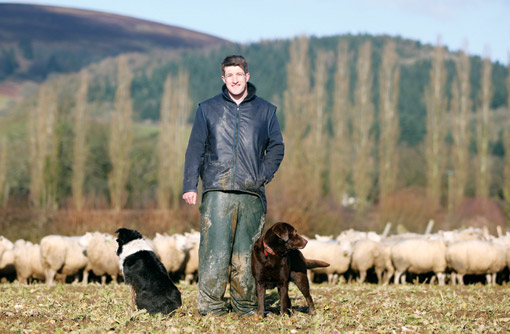 Two producers with contrasting farm situations are working together to ensure they both benefit from lambs that haven’t met specification at weaning.

Treating lambs that haven’t met specification at weaning as a cash crop could free up land and increase profits in the long term, believes Shropshire producer James Evans.

This is the first year Mr Evans has chosen not to hold over lambs and sell them fat in October.

Rather than gambling on the market in the hope of a few extra pounds later in the year, he has made the decision to prioritise his flock of 1,100 breeding ewes, and run a system that best suits his farm.

“My farm is suited to breeding cows and sheep. If I accept this and let animals be fattened elsewhere, I think I will make more money in the long run,” he says.

With no forage crops on the farm, any lambs held over for fattening will take up room that could be used by the main flock or the 250 suckler cows.

“You think you’ve got the land and the time, so they’re there for free, but they’re taking up grass that could be deferred grazing or extra for the beef animals,” he says.

Lambs could be grazed on root crops at Mr Evans’ farm, but he believes it would be more beneficial to save such grazing for the ewes or rent it out when there is an excess.

Getting lambs off the farm also means he knows exactly what forage stocks he has for the rest of the year.

“By selling my lambs, I may also be able to keep more ewes and increase returns this way,” he says.

Mr Evans explains how selling all lambs immediately after weaning is common practice in New Zealand. Lambs get weighed on to a lorry and the farmer then gets paid for every kilo or a head.

“Hill farmers are often presented with the problem of where to put lambs once they’ve been weaned. It makes sense to send them to someone who’s got root crops in,” he says.

Worcestershire producer Andrew Baldwyn was one such farmer. After winter wheat drilling was delayed last year, he chose to plant 12ha of rape in May, alongside 16ha of a red clover, ryegrass mix.

As a result he has been put in a situation many farmers would dream of, with an excess of forage crops.

“I planted the rape with the view to using it to finish my last 800 lambs, but because the crops have done so well, I realised I could finish another 300 lambs,” says Mr Baldwyn, who farms 960 mainly Welsh Mules at Lower Berrow Farm, Redditch.

To ensure rape was grazed off sufficiently for winter wheat drilling in October, Mr Baldwyn needed to up stocking rates, thus creating room for more lambs on the red clover/ryegrass leys.

After both Mr Evans and Mr Baldwyn consulted Kate Philips of ADAS on separate occasions, she suggested they worked together to meet each other’s requirements. As a result, Mr Baldwyn purchased 300 of Mr Evan’s lambs, averaging about 35kg a head.

“I’d visited a number of livestock markets, but I couldn’t find a bunch of lambs off one farm,” explains Mr Baldwyn.

“Sourcing from one farm is important to me, as it makes life easier with tagging requirements and reduces disease risk.”

Although he may have been able to buy them cheaper from market, the fact the lambs were all from one group and had been tested for faecal egg counts was worth a lot to Andrew, says Mr Evans.

They agreed on a price equivalent to Mr Evans having killed the lambs at 35kg live weight.

Mr Baldwyn says it is too early to judge the benefits of buying these lambs, but he hopes to earn extra profit from finishing them, while making more efficient use of forage crops. “If it works well, I’d consider doing it again,” he says.