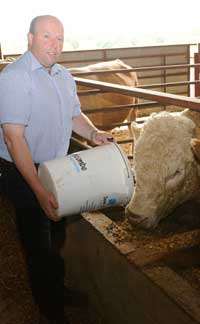 We have been lucky in this corner of the country, escaping the worst of the rain that fell over Scotland last month.

While travelling to NFUS AGM at St Andrews, I realised how much rain we had missed with fields of winter wheat around Perthshire lying in water. This year’s AGM was hosted by the Ayrshire region, who were excellent hosts

As the AGM was held a week earlier this year, it fell before the Perth bull sales, which resulted in a much more subdued and early evening for me than usual.

At the bull sales, the Simmentals enjoyed a steady trade, although the breed average was down by £342 on the year. I think this was a reflection on the extra costs inflicted on livestock farmers during the winter months. Our entry of eight bulls topped £6090, averaging £4560. We also won the reserve group of three.

I have been continuing to sell hogs and cast ewes on a fortnightly basis. Although the concentrate feed has been expensive, we have been recouping this by selling hogs to average £87 and cast ewes to £95.

We recently scanned the ewes that will start lambing at the beginning of April. This returned a result of 201%, with only 10 barren. I had been concerned the terrible weather when lambs were put out would have affected lambing percentage, but obviously they knew the best way to keep warm.

The ewes that are having single lambs are only receiving liquid feed supplement and hay, while the twin- and triplet-bearing ewes are being fed expensive 18% protein rolls.

The decision to put more than 90,000 tonnes of pig meat into intervention storage has helped halt the drop in pigmeat price. The only down side is that some day this will have to come back onto the market place.