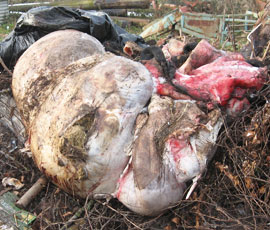 A farmer who failed to properly dispose of the remains of a slaughtered cow and illegally slaughtered beef in his unregistered farm shop has been hit with a huge fine.

He had previously admitted four charges relating to the identification and registration of his cattle, failure to comply with regulations regarding the disposal of animal by-products, and 13 food safety and hygiene offences, including failure to protect food from contamination that likely made the food unfit for human consumption.

In December 2010, trading standards carried out an inspection of Shelton Farm Shop, the animals and farm premises, the court was told.

They seized a large amount of illegally slaughtered meat, which was later condemned by Daventry Magistrates Court, who ordered its destruction.

Trading Standards officers also found the remains of a cow on the site of a previous bonfire as well as a number of animals without proper identification documents.

Speaking after the hearing, councillors praised the level of the fine and said it should act as a warning to others.

Cllr Ben Smith, Northamptonshire County Council Cabinet member for environment, said: “This is a very serious matter; by not complying with regulations regarding cattle identification and failing to dispose of the remains of a dead animal in the proper way, this farmer was risking public health and breaking the law.”

Cllr Steve Osborne, housing and health portfolio holder at Daventry District Council, said the presence of contaminated, illegal meat in an unhygienic shop that was open to customers posed “a deplorable risk to public health”.

• Want to alert others of crimes in your area? Visit our Crime Register to post details and set up email alerts of criminal activity in your area.