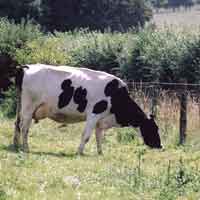 Knowing the health status of your herd is becoming increasingly important as recent figures show more than half of dairy herds have been exposed to IBR and leptospirosis with nearly all herds being exposed to BVD.

And with symptoms often not obvious it is regularly a case of “out of sight out of mind” according to vet adviser Ruth Vernon. “After initial infection, cows may appear healthy, but their immune systems may be impaired and this results in herd performance that is always below expected levels,” she says.

The results come from Intervet/Schering Plough Animal Health’s milk testing service, DairyCheck, which showed in 2008 65% of herd tested positive for IBR infection, 69% for leptospirosis and most for BVD.

Splitting animals into different age groups for testing is often the best way to get a more accurate indication of the disease status of the herd.

“Young animals, such as groups of heifer calves, can give a more accurate indication of the current disease level and when tests show positive for antibodies it indicates they have been exposed to the disease recently, increasing the likelihood it may be circulating,” says Mr Biggs.

“But knowing what to do once you have received results is often the tricky bit and needs expert interpretation. One solution won’t suit everybody and you need to look at how you farm and what the risks are. Thinking about how the disease may have been brought in is important.”

However, although vaccines are available for all three diseases it is not the total solution according to Mr Biggs. “Vaccination won’t solve all problems and the risks really must be looked at. Biosecurity is important whether buying in animals or if they are in contact with neighbouring herds. All these risks influence treatment as it’s important to take specific and realistic steps in order to manage the disease.”

And with the symptoms often not obvious in these diseases, it can be hard to build a picture of the severity of the disease in the herd, according to Salisbury vet, Keith Cutler. “Each disease is slightly different and each one must be looked at individually for every farm,” says Mr Cutler.

“When bulk milk tests show positive for BVD you can then do a bulk milk PCR test to look for persistently infected (PI) animals in the herd, which spread disease. If PI animals are identified they can be culled out the herd. Vaccination is also an option for some farms,” he says.

For leptospirosis the fact it can be transmitted to humans is an added problem. The level of infection within the herd will influence whether cows should be blanket treated with antibiotics and/or vaccinated. IBR is slightly different due to different strains, but the new marker vaccines available help in the decision, he says.

“Every farm is individual and the risk is always slightly different, but every farm must know their health status and seek advice,” adds Mr Cutler.