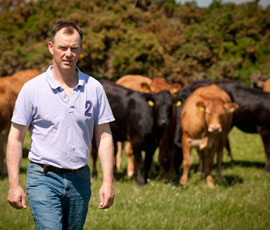 Hopefully, by the time you are reading this our first cut of silage will be well under way.

A chilly and very breezy May also brought 35mm rain, which has helped the crops and the grass to thrive and bulk out. All we need now is some heat and sun, which is forecast to happen at the beginning of June.

We hosted three farm visits during May, which included a group of farmers from Southern Ireland and NFU members from the north-east of Scotland. I can sympathise with the American X-Factor audience trying to understand Cheryl Cole’s [Geordie] accent – trying to understand the Aberdeen and Southern Ireland accents at times proved a little difficult.

Jac and I have both been updating our skills over recent weeks. I hosted an AI course for three days at Upper Nisbet. There were six of us on the course, which proved to be very entertaining as well as very interesting.

On one of the days we also hosted a visit from 60 local primary school children. A cow very timely produced her calf during the visit so we had our very own “Calving Live”. Perhaps the children were a bit too young to understand that what they actually saw during their visit was the start of the reproductive process right through to birth.

Jac’s latest project is to update our farm website and attended two free workshops to bring her skills up to speed to do this. It won’t be ready to be unveiled for a few more weeks so don’t go looking yet.

More on Robert Neill and other Farmer Focus farmers