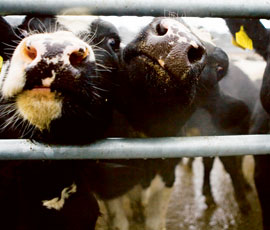 Mixing heifers with older cows prior to calving could reduce the stress of joining a new group at lactation, according to new research.

Heifers that weren’t mixed received more butts than mixed animals and were also more likely to be chased compared to those that were mixed. “This suggests heifer welfare was improved by mixing them with older cows prior to calving,” said Mr Boyle.

In particular, during the calving period, Mr Boyle also found heifers that were mixed engaged more in aggressive behaviour during feeding periods and spent less time in cubicles. “This implies mixed heifers had an increased level of confidence.”

Dairy farmers hoping for a reprieve in current feed prices are unlikely to see a fall back any time soon.

Volatility in raw materials has been extreme in the last nine months due to variable production. In fact, wheat stocks over the last couple of years have been at their lowest since 1947, according to BOCM Pauls raw materials director Tony Bell.

And even though world feed stocks look to be higher, it is simply not available due to where it is being grown, added Mr Bell. “China is producing a lot of stock but it is being politically controlled. Sixteen years ago they also used to be a net exporter of soya bean meal but now they are one of the largest importers,” he said.

Coupled with increasing demand from the livestock sector and the growing population comes a new demand for biofuels. “The US is putting one-third of its maize crop in to bioethanol and globally half a million tonnes a year of animal feed products are being burned.”

“We have got to look at new feeds, by-products and co-products for feeding livestock. We have also got to look at products from the biofuels industry such as Vivergo pellets which provide consistent and high-quality protein to ruminants.”

Dr Rowlinson also expressed the need to get more home-grown forage in to cows. “We need to exploit what feed resources we have,” he said.

AFBI researcher Ryan Law told delegates the most common approach by farmers to reduce negative energy balance (NEB) post calving was to increase energy intakes, by increasing the proportion of concentrates being offered.

However, this approach can have negative effects, he said. “Offering diets that contain high levels of concentrates can lead to rumen acidosis, impaired rumen function and reduced intakes, which can then exacerbate NEB.”

He also explained that offering fewer concentrates in early lactation was likely to reduce the crude protein content in the diet, which has been shown to improve cow energy status.

“Fresh cows fed a diet where concentrates were built up gradually ate more forage. These cows also returned to a positive energy balance on average at seven weeks post calving compared to 19 weeks post calving for those fed a high concentrate diet early on. Reproductive performance and milk yield and composition was unaffected by treatment,” he added.