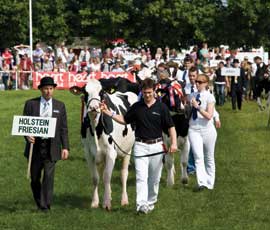 Animal rights protestors gathered at Kent County Show this weekend to campaign against live animal exports, which resumed from Dover in May.

Although the handful of protestors demonstrated peacefully most of the time on the side of the A249 opposite the Young Farmers (YFC) area of the showground, the Kent County Show Society said they were at one point “verbally abusive” to some YFC members.

Commenting on the situation Kevin Attwood, chairman of Kent County Show said: “Most of the time the protestors were peaceful, but for some of the time they were verbally abusive. The police spoke to them and moved them further away from the Young Farmers area and that largely sorted out the problem.”

Mr Attwood appreciated their right to protest, but described their actions as “irritating”.

Kent YFC member Emma Glenister, who was showing Limousin X cattle at the three-day show, said the protestors were leaning over the fence and shouting abuse. “They were saying things like animal farming is animal holocaust and while we were washing our animals they called us cattle molesters. At most there were six or seven protestors. It wasn’t very nice as there were some younger members there,” she said.

Despite the largely peaceful protest the show received plenty of support from the public, attracting more than 75,000 visitors over the three days.

Read more about the live exports