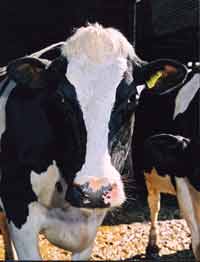 The dairy industry has refuted claims made by the RSPCA that genetic inbreeding is causing serious health and welfare problems in the national herd.

The society has this week published material on its website under a headline ‘Are we milking the dairy cow to death?’ It states that dairy cows are “possibly more inbred than pedigree dogs” and has called for a national strategy for dairy cow welfare.

Hayley Campbell-Gibbons, the NFU’s chief dairy adviser, said the problems were being overstated by the RSPCA and significant progress had been made in improving welfare over the past 20 years.

“I’m absolutely staggered by the irresponsible and inaccurate statements issued by the RSPCA,” she said.

Ms Campbell-Gibbons said 95% of GB dairy farmers were operating to Assured Dairy Farms (ADF) standards which involved producing herd health plans and the incidence of diseases such as mastitis had halved since the 1960s.

The claim that farmers who invested in higher welfare standards could be rewarded through higher prices was also “unrealistic”, she added. The way to improve investment in welfare was to get a better distribution of profit along the supply chain. “I’d like to see the RSPCA support us in a more constructive approach.”

“I don’t think there is a great deal of evidence that inbreeding is a problem. I’d also ask the society if things are so bad how many prosecutions of dairy farmers have there been over the past 12 months?”

Simon Gee, head of communications at Holstein UK, said the RSPCA was radically overstating the inbreeding problems and was possibly outdated on its estimates for issues such as lameness.

“Inbreeding has been an issue in North America, but we’re confident we’ve been able to call on a wider gene pool here and have taken steps to make sure we don’t go down that cul-de-sac.”

“They are fully aware that if a cow is suffering any form of pain or discomfort then it impacts on its production performance and subsequently its ability to contribute towards herd profitability.”

John Avizienius, deputy head of farm animal science at the RSPCA and a former herdsman, told Farmers Weekly he was simply highlighting research produced by the industry and he didn’t think he was overstating the problems.“I hope people have something to say that can disprove my evidence.”

Mr Avizienius added: “I’m not attacking the industry here and I still believe the UK has some of the best dairy farmers in the world.” (Click here to watch a video of John Avizienius)

What are farmers saying on the forums?

Read more from the forums and join the debate yourself.