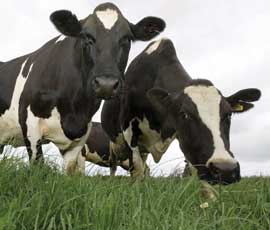 Farmers looking to breed animals that make better use of forage may be interested in a new consignment of genetics to the UK.

Sterling Sires has been appointed by Genetics Australia UK distributor of a range of cows with a focus on milk from forage, robust medium-sized cows and those with a better than average longevity.

Cows from Genetics Australia have been developed to survive tough grazing and farming systems with the ability to be efficient converters of forage into milk, said Genetic Australia marketing manager Rob Derksen.

“We breed cows that will convert forage into milk, not cows that are trying to win shows. The cows we breed will do well from grass, but will also respond to supplements, unlike New Zealand genetics that will tend to put additional supplements on their back,” he said.

And with close similarities between production systems in the UK and Australia, Sterling Sires director Paul Westaway believes the new genetics will have an impact on the UK dairy and beef industry.

“There is a move in the UK to make better use of forage and to breed cows that are more robust. That is exactly what they have been breeding for in Australia.

“Many cows graze for six to seven months of the year, with an average lactation length of 300 days and an average number of lactations of four, compared with three in the UK.

“If we can increase the average number of lactations from three to four, and the cow only pays for herself in the second lactation, that’s a 50% increase in profit by increasing lactation length by one,” he said.

And with these bulls producing slightly smaller and more compact offspring, Mr Westaway said dairy bull calves would be a better shape for beef production.

The new gene pool that consists of Holstein bulls, Jersey bulls and Aussie Red bulls – a combination of Scandinavian Red and Australian Shorthorn bulls – could also provide alternatives for those wishing to cross-breed, said Mr Westaway.

In addition to the production benefits from the new genetics, semen from two of the Holstein bulls and one of the Jersey bulls also contains the A2 gene. Milk rich in A2 beta-casein protein is thought to have certain health benefits, which some UK processors are already interested in.

In Australia, milk from homozygous carriers of the A2 milk protein gene is being sold at a premium, with interest growing.

No other breed catalogue in the UK is currently marketing bulls containing the A2 gene, said Mr Westaway. “There is no premium on semen from A2-approved bulls, but it is just an additional thing if people are interested in it,” he said.