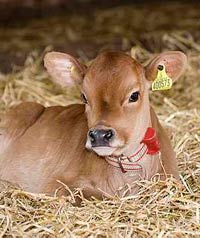 One of Cogent’s most popular bulls, Huddlestone Spooky, has been shown to reduce the average gestation length by nine days, leading to substantial welfare and financial benefits.

“Early indications show Spooky is cutting a remarkable nine days off the average gestation length, which is considered exceptional in the cattle breeding world.”

“The potential benefits are enormous – any dairy farmer will tell you a difficult calving sets off a chain of negative health events.”

Spooky’s calving ease figure is exceptionally good and his calves are reported to be strong and vigorous, developing into robust and great framed cows for which they have earned a reputation.

“Easier calvings are clearly being influenced by shorter gestation lengths, which data from NMR has revealed to average just 275 days, compared with the national average of 284 days.”

The cow carrying his calf has an average of nine extra days to return to cycling activity, potentially giving her a full 90 days to get in calf and still remain within a 365 day calving interval.

“If they then reduce days open, they will also cut nine days off this figure.”

“Reducing days open by nine days has the potential to save £45/cow/lactation.”

Spooky also transmits other desirable traits for production, management, fitness and type. PTAs for production are 341kg milk with 34.7kg fat plus protein.

“Anyone using Spooky stands to benefit from a win-win situation. They will not only get the genetic benefit he transfers to his daughters, but they also have the potential to make significant financial and welfare gains,” says Mr Pocock.