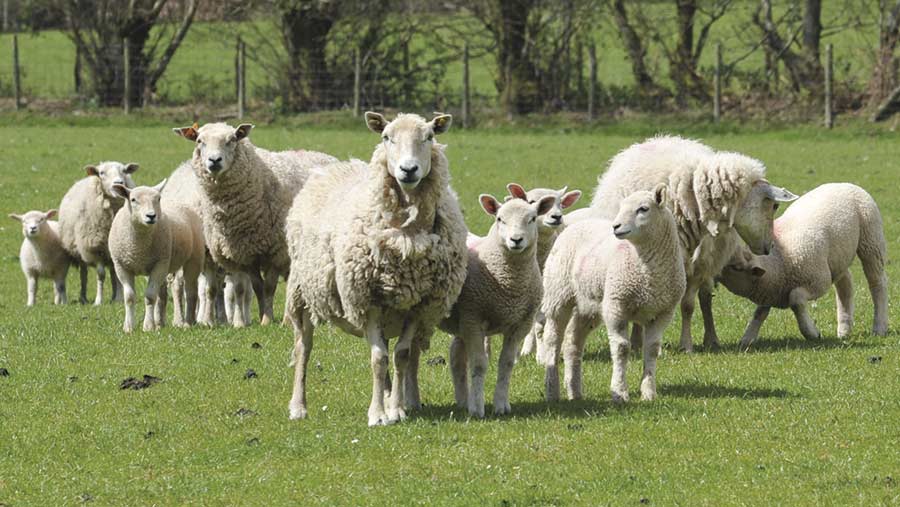 Tupping a flock of 3,000 hill ewes with homebred rams is enabling a Welsh livestock farm to produce lambs with the uniform conformation sought by buyers.

Up to 20 rams are bred annually at Llwyn Bedw from a nucleus flock of 100 Talybont-type breeding ewes – a breed that combines the Welsh ewe with a Cheviot.

They are tupped with Talybont-type bought-in rams, which are purchased every two years.

“We can sway towards the Welsh or the Cheviot, whichever influence we feel the flock needs at that point in time,” says Stephen Williams, who farms with his wife, Lisa, father, Godfrey, and 21-year-old son, Luke.

Lambs are marked in May and the best male lambs with the potential to become breeding stock are selected.

“We are not too fussy at that pick because it is hard to judge at that stage of growth how they will develop. We can castrate those that don’t make the grade.

“At weaning, we look at how they have developed and pick out the best 40. They have got to look the part.”

The ram lambs are wintered on ad-lib concentrates and hay, and are housed but have access to grazing. By the end of the winter, the group is narrowed to 30.

“Later in the summer, when they have put on weight and have been shorn, we assess them again to get the group size we need before service, usually around 20,” says Stephen.

“They are not the model sheep you see in the market because they are in their working clothes but they are hardy and they do the job.

“Breeding our own rams keeps the flock more even. We sell to the live market so if we have a group of 150 or so to sell in one lot they will be of an even size and they look a nice bunch.”

Reducing the risk of inbreeding

“With 3,000 ewes and 20 rams and 750 yearlings coming into the flock every year the law of averages means that the odds on any inbreeding are very small.”

The Talybonts are a hefted flock and thrive on the hill. “The family will hate me for saying this, but they are a bit of a mongrel breed.

“They have been hefted on these hills for hundreds of years and that’s the breed that works well on this hill. You can’t mess with what the yeomen did, they knew their stuff,” says Stephen.

Broken-mouth ewes are sired with a Charollais ram and the ewe lambs retained as replacement Charollais-cross ewes, which are then crossed with a Texel to produce lambs for the early market.

“It gives us the ability to sell ewe lambs and wethers from the end of June. It extends our lambing selling window,” says Stephen.

These crosses achieve average liveweights of 32-34kg. “We had been keeping them on to get them a bit heavier but we weren’t gaining anything because it meant selling them at a time when the price had dropped,” says Lisa.

There is also a lowland flock of 350 Charollais x Talybont-type ewes. Four Charollais tups and four Texels are bought every four years to sire this flock.

Charollais rams are sourced from the pedigree sales at Builth Wells and the Texels from Innovis.

All the replacements are lambed as yearlings, spending their first winter on tack near Oxford.

“We introduced the Charollais because it also gave us an earlier selling lamb, but we are contemplating switching to another breed because the cross isn’t performing as it should,” Stephen explains.

“It isn’t as good a mother as the Texel-cross so it might be that we look for a breed that can improve those mothering abilities and milkiness.”

Rams run with the flock from 1 November at a ratio of one ram to 50 ewes and remain with the ewes for two cycles.

Ewes are tupped in the enclosed areas of the farm – 405ha of the Welsh Water-owned farm are under fence and the family also have hill rights to 1,214ha on Buckland Common.

Ewes are fed silage and sugar beet with a 18% protein concentrate four weeks before lambing.

The sugar beet is bought-in, but a 3.8ha crop is being grown on the farm for the first time this year.

“Demand from AD plants has made it too expensive to buy so we are growing our own,” Stephen explains. The seed was drilled in the first week of May.

The flock is lambed indoors in batches, with the Charollais the first to lamb in the first week of February. This year they achieved a scanning percentage of 170%.

Next to lamb are the broken-mouth ewes that are in lamb to a Charollais – these scanned at 110% this year.

“Once they have finished we bring in the hill ewes carrying twins. We would like to lamb these outside but when we have done this in the past we have problems with mis-mothering,” says Stephen.

The hill ewes carrying single lambs are the only animals to lamb outdoors. They are moved to the fenced area where the family can keep a close watch on them and lamb from 1 April.

The Williams family favour live sales, insisting livestock markets are needed to set a fair price for the farmer.

Most of the lambs are exported to France and Italy. Future trade deals came under the spotlight at the Welsh Sheep event, but Stephen is confident the European export trade for lambs can be maintained after the UK leaves the EU.

“The demand for those lambs isn’t going to disappear overnight and there is no one else to fulfil that demand. We just need to fight for a fair deal without too many restrictions and levies,” he says.

“When the EU was created, the world was a big place and we had to trade with our neighbours because of restrictions on transport and communications.

“But now you can speak to a buyer in Tokyo as you would a buyer in Europe.

“If lamb producers in Australia and New Zealand can trade globally, why shouldn’t we? We have got the best product and the highest livestock welfare standards in the world, there will always be demand for that.”

All the broken-mouth ewes are lambed and then sold at Raglan or from the farm.

Godfrey admits one of the biggest challenges of farming a tenanted hill farm is making a profit. “This farm has got to be run as a business, it has got to make money or it is not worth doing.

“We try to keep the best stock possible, good stock make good money. On the hill, it is more about numbers.”