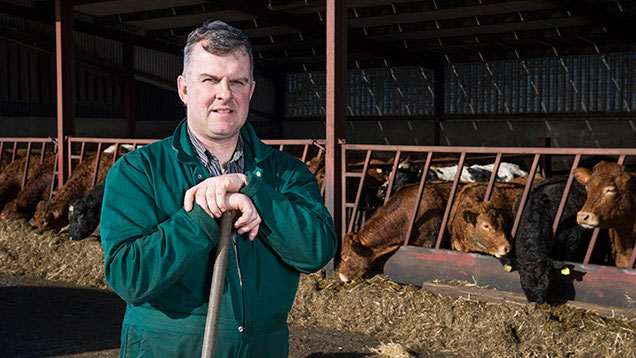 As I sit here and write the sun is streaming through the window. Easter week marks the first bit of good weather we’ve had in Northern Ireland. But there’s no time to stand still.

Calving arrived with a bang and with only about 35 cows left to calve, things were going pretty well until the past couple of days, when we had cows not presenting themselves and a couple of calves that might have died without early intervention.

See also: What you need to know about the TB testing delivery service

All the usual procedures such as blood tests had been done, so I suspect it is an Iodine deficiency. However, the animals have had high-iodine boluses, dry cow minerals and some pre-calver nuts. Something is amiss and I await the results with anticipation. Meanwhile, I have ordered iodine water tablets.

Robert has now sown all of the silage ground and the grazing platform has received 75kg/acre of sweet grass, 23 units of can, mag, sulphur and sodium. In theory, this should lead to better grass use in paddocks.

The ground is still a bit sticky and we hope to start rolling next week along with ploughing.

At this stage I would have liked all of the cattle turned out, but it has been a case of take three. Lauren is home from her placement year for Easter and was a great help. We vaccinated all youngstock and wormed using an ear injection, which should last 120 days.

The yearling bulls have done exceptional – they should average 620kg and will be gone in about six weeks.

A water trough and more paddocks are on the agenda for April and May. We may even make some early bales of silage on a particularly strong paddock, however this will we weather dependant.

During a late night C-section my vet Michael was airing the concern that TB testing may be heading toward group staff to complete rather than vets. He said this was his bread and butter and would see many large animal practices raise charges or reduce the number of vets, which would reduce an important service.

I changed the big red ATV this year. The last one gave tremendous service with nearly 30,000km on the clock. I did think how much fitter I would be if I walked, and how much weight I would lose.

Sam runs a spring-calving herd of 120 Limousin-cross sucklers in Kircubbin, Northern Ireland. He was 2011 Farmers Weekly Beef Farmer of the Year.