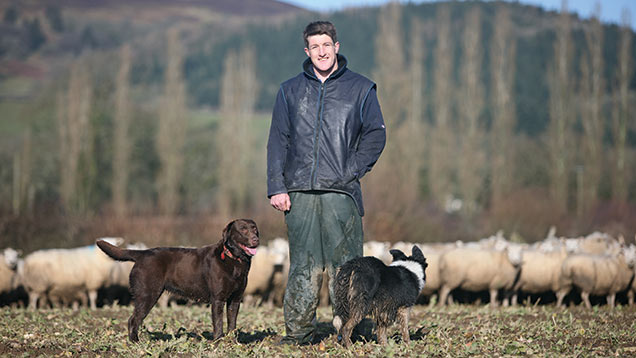 With lambing and calving in full swing it’s a great time to be busy when the weather is on your side.

So far we have lambed half the ewes and have about 40 calves on the ground, which is pretty good having only started nine days ago.

As with every year new problems come to challenge us. This year it is fluke.

We have spent many years thinking we were on top of the problem, with ewes receiving three doses throughout the winter and cows receiving a dose six weeks post-housing. But, having done some trial work with Liverpool University, we found cows still have mature fluke despite having been treated with a popular four-in-one combination fluke/wormer.

This has now meant that we are using an injectable on each cow as it calves. Hopefully this will break the cycle and stop pastures being reinfected.

On a positive note, bull sales have far exceeded my expectations – despite a great year last year – and heifer sales are also proving to be very good. Why is when you are trying to breed heifers you seem to end up with more bulls, and vice-versa?

I have had great interest in my trial of using both Charolais and British blue semen on my Stabiliser cows. We are just about to wean these calves and weights are showing no improvement in weight gain, but a higher degree of conformation.

This is really what I was hoping for, proving the Stabiliser cow is capable of either producing great maternal replacements or producing animals that some people desire in the market. It will be interesting to see how they compare when killed and once cost comparisons are made.

We will also be monitoring the effects of using nose flaps as an anti-sucking device to wean the autumn calves this year, in the hope it will reduce the stress as the calves stay on their mother for four to seven days, which allows contact, but they’re unable to have access to milk and are weaned afterwards. I’m hoping for reduced stress, less noise and reduced weaning check, but we will await the results.

Having been flat out lambing and calving, my cycling training has taken a back seat, which concerns me slightly.

One thing I do know is that when I hit the roads again there will be no mistaking me, as surely I’ll be the only cyclist with bright orange hands from a potent combination of iodine and fluke injection.