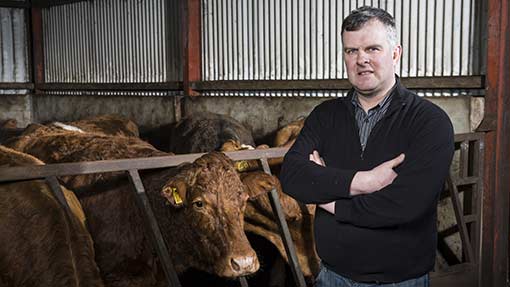 The rain has appeared. We’d had none since 5 September, but gales and two inches appeared on 5 October and it has poured ever since.

Our housing plan is now in full operation and all beef cattle are indoors and well settled. Cows and calves have been given their pneumonia booster and worm dose and half the calves are weaned.

At this point we house the cows and return the calves to the field. It’s always worrying to hear roaring cows, but the sharp shock and their familiar surroundings and cohorts keep them reasonably calm. The calves will be housed in straw courts later in the month.

At this time of year the feed meal reps are in and out of yards selling their “bespoke blends” as they call them. By all accounts, rations should be well back on last year.

And with bumper harvests and stale demand, it’s probably the best time in years to feed cereals with added protein.

But will the cheap cereal hold any advantage for us beef farmers, who market a grass fed animal, against the rest of the world’s cattle that are predominately grain fed? Maybe it will stimulate the Europeans to return to exporting our weanlings for feedlots.

Silage season looks like it’s over and I have missed my fourth cut which is usually made in bales. Cutting this wet, high energy grass, would probably only produce black dung so unless it turns into a dry end to the month, weather has stopped play.

The ewes don’t mind the weather and by the looks of the raddle marks, neither does the ram. So by the looks of it the sheep will be lambing flat out along with the synchronised cows.

The beef price has started to lift, it’s up 24p and maybe more in the last two weeks. Is this a ploy for finishers to fill sheds and get them on the merry-go-round for another year? Only time will tell.

Sam Chesney runs a spring-calving herd of 120 Limousin cross sucklers in Kircubbin, Northern Ireland. He was 2011 Farmers Weekly Beef Farmer of the Year.