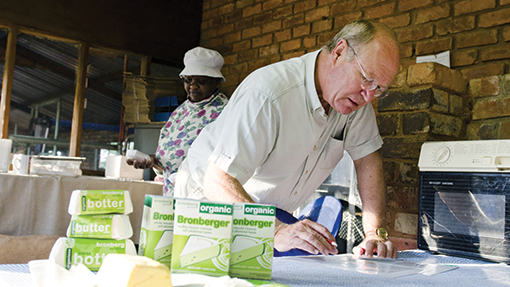 The farm is, at this stage, very dry. It’s hot during the day, and the pastures are brown with just a hint of green here and there. Nature, we, and I’m sure the animals, are yearning for the first summer rains.

During the past two weeks you could smell some moistness in the air that had not been there before, but we have not yet seen real thunder clouds, bringers of the early summer rains.

And the south-easterly wind – a sure indication to me that rain is on the way – has not yet started to howl in the Cape.

We had a bush fire scare a few days ago, but fortunately the community came out in force. With their fire-fighting equipment we managed to contain it before it reached our farm.

Bush fires remain extremely dangerous hazards. Quite a number of deaths (I estimate about 20) were reported of people who were caught up in bush fires this winter season in South Africa.

Sadly I have to report that Redwater, and the more virulent Asiatic strain at that, has again raised its ugly head. This time with the animals I recently bought in from the Western Cape province. I lost a few animals with almost no warning.

As a result, I isolated all the remaining bought-in animals,  fortunately with good result. This should of course have been done with all the animals when they arrived on the farm. But one never expects the worst! That is why it was not done.

A few days ago I received an email from Clive Glover. He writes a column for a packaging and print media magazine.

He saw our butter in a prominent supermarket and was so impressed with our packaging that he decided to write an article about it.

After the latest Redwater incident, I really needed this compliment and I am looking forward to reading the article.

Danie Schutte is an organic Ayrshire dairy farmer who also processes dairy products on his 90hafarm near Pretoria, South Africa