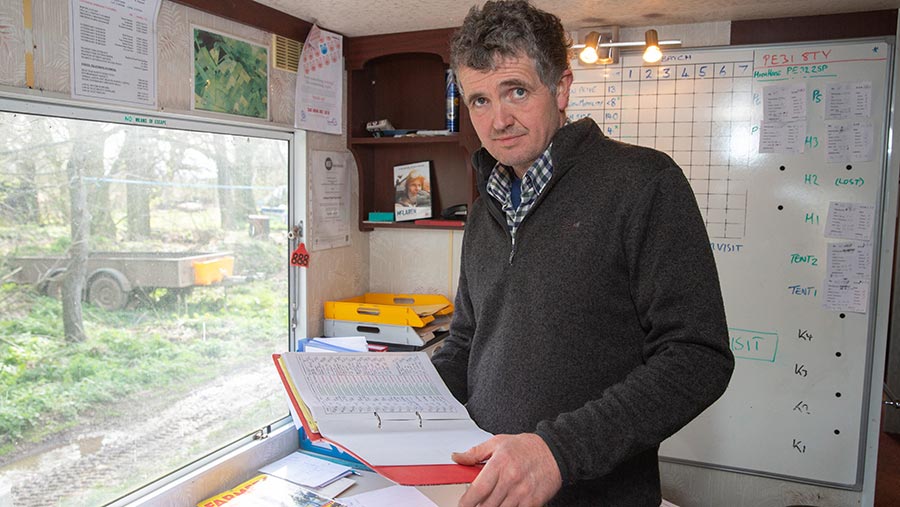 Several months ago, our vet, Jenny Smith, spent a day with us during service week.

We split ourselves into groups and all had a few hours with her performing artificial insemination (AI).

The idea was for her to observe us working, assessing our AI technique and see how stress-free, or not, the operations in the service tent were.

She then made a few suggestions, giving the younger staff some fresh ideas, before reminding us older folks of a few things we probably once knew, but had clearly now forgotten.

See also: 6 causes of pig infertility and how to avoid them

One of her observations was the semen was taking longer than she would have liked to leave the flat packs, pass down the catheters and into the sows – I guess we had just got used to this pace over the years.

Jenny suggested we position the flat packs higher during insemination.

To achieve this, I increased the weight of the counter balance that’s attached to the flat pack via a cord and pulley system.

With the flat pack now 20cm higher than before, the process of insemination did indeed speed up, quite considerably in fact.

Over the course of a day, we typically serve 28 groups of six sows.

By saving five minutes per group, we cut two hours off the time spent serving.

Now, AI is getting wrapped up by lunchtime, and that’s a welcome result on its own.

The true test of this new method was the routine seven-week pregnancy scan, and it was good – with only four drop-outs from 165 sows.

This trend continued batch after batch, so when the first sows came to farrow, the team had high expectations of also seeing an increased number of piglets born alive (BA) per sow.

They weren’t disappointed; batch one averaged 13.7, batch two 13.5 and the present batch is unfinished, but running at 13.8 to date.

We had been averaging 12.3 BA, so this has been a really great result and so easily achieved – thanks Jenny.