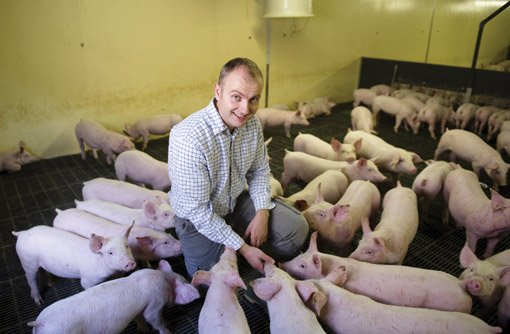 Plans are well under way for the Oliver-James Memorial Tractor run, Auction and BBQ. On Saturday 24 August we are having a fundraiser in memory of our wee boy Oliver-James, who died very unexpectedly two-and-a-half years ago.

Hopefully, we will raise plenty of money and awareness for Rodney Davidson and his family in Kenya, who work in an orphanage with nearly 200 children. If you would like to see the work or support it you can look up the website at www.fame.uk.net.

The Northern Ireland Agri-food strategy board has now published its report Going for Growth, with some very ambitious plans for 15,000 extra sow places by 2020. It has been estimated that in order for some producers to reach these targets an investment of £60m would be needed in new housing. I hope that some well-deserved support can be given to our industry on the back of this report’s ambitions.

I am now using whey for dry sows, lactating and weaners, with no ill effects to mention and some significant reductions in meal consumption. It’s just a pity there seems to be very few other alternatives like it in Northern Ireland. I would love some of the liquid products that are available on the mainland, but haulage always makes it unrealistic to use them here.

I took part in the Lisburn 10km fun run and was well pleased I finished it in 1hr 5min. The furthest I had previously ran was 5km on a treadmill, so getting round at all was an achievement. However, when you set it against the winner of the run at 31min my attempt looks feeble. I don’t know how anyone could run that fast. I might take part in the Belfast Half Marathon come September, but some serious training is needed before then.

Andrew McCrea farms a 740-sow birth-to-bacon business and 150 beef cattle on 37ha. He is a DARD Focus Farmer and was 2010 Farmers Weekly Pig Farmer of the Year

For more articles from Andrew McCrea