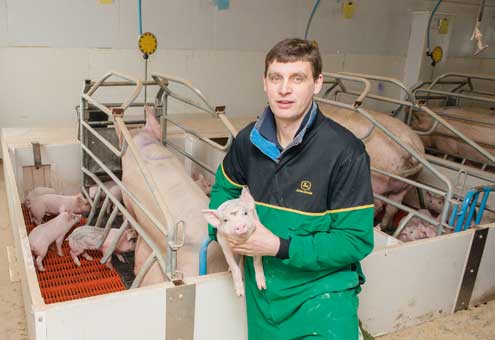 It’s mid-June and the crops are on the whole looking well. Spring barley and the wheat at home got a coating of slurry. This is usually a time-consuming job with the slurry tanker, but this year it was done in two days by a contractor with an umbilical system and dribble bar. Three weeks on and you would not know they had been in the fields.

Pig prices are rising slowly, but have a bit to go to catch up with beef and lamb. Hopefully the tightening of supply will help to keep the price moving. At a recent meeting with a large slaughter and processing firm the question was asked if cheap British pork was subsidising beef and lamb in the supermarket. The speaker skirted around the question. My suspicion would be that it is and on speaking with my local butcher he agreed that selling beef and lamb was less profitable than selling pork products. I don’t want to see beef and lamb prices slide, we just want to get pig prices up to match them.

With disease burden in our pig herd high, a partial depopulation would be an option, but this will take a lot of organisation and the timescale for getting enough gilts into the system seems to be about 20 months. Summer would be the preferred time to have a depopulation, so I will have to get the calendar out and make a decision. In the meantime we are about to start a PRRS vaccination programme. This should relieve some of the pressure on the growing pigs, giving them a boost in growth and help improve on our already well-performing breeding herd.

We had two vet students with us last week, both just finished their first year at Edinburgh. Louisa, a local farmer’s daughter, has been coming for a week’s work experience every summer for the past four years and did a project on piglet deaths during farrowing and in their first few hours of life for her sixth-year biology thesis. Both students got on well and will make good vets in years to come.