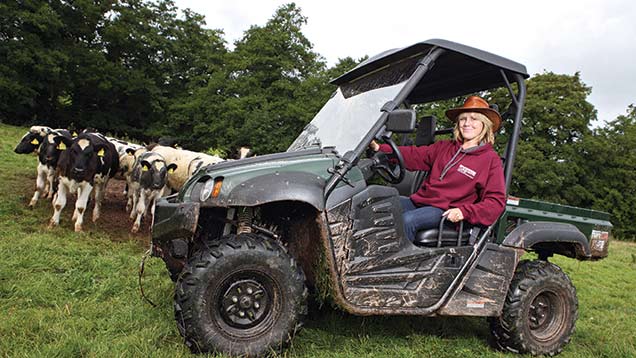 Liveweight was 39kg and they averaged at 21kg deadweight.

Butcher Huw was pleased with the killing-out percentage and they had tremendous conformation.

The past few weeks have been particularly busy on and off the farm and I’m still struggling to say no but there are so many great events happening.

When asked to speak to the dog owners of Cwmbran about the importance of worming and poop-scooping I just couldn’t say no.

The following week I was delighted to be guest speaker at the East Wales and Borders Vintage Tractor Club on the launch of their tractor run, raising funds for the Velindre Cancer Centre.

Recently, just before I was due to speak at the North Somerset pre-show dinner, I was called to help assist a heifer that had started to calve.

I should explain that we no longer have a bull (or bullocks) on the farm, so this was either an immaculate conception or she’d jumped the fence a few months previously.

To cut a long story short, following a complicated caesarean, we had a rather large but healthy bull calf who looks very much like the neighbour’s Charolais.

Jim and I then had to dash off to Somerset after quickly washing off the iodine and blood (isn’t farming glamorous).

Kate Beavan farms 200ha alongside her husband Jim on one of two family farms near Abergavenny, Monmouthshire. The main enterprise comprises of 900 breeding ewes and a small enterprise of rearing calves. Meat is sold direct to the family’s traditional butchers shop. Kate and Jim hosted the first series of Lambing Live in 2010