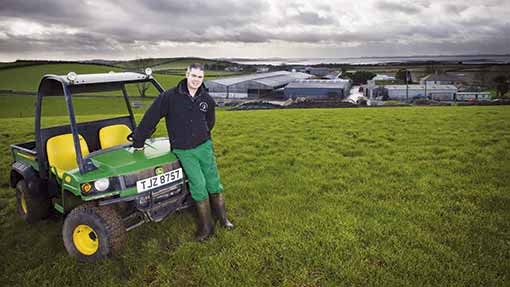 Things have been stop and start on farm for the past few weeks, mainly because the weather hasn’t been that exciting. Grass still isn’t doing what it should be due to lack of heat and most of the livestock are still housed.

On top of that, the Fonterra Global Dairy Trade auction was down 5.2% this time and 4% down last time. Down by nearly 10%, it’s safe to say our bubble has burst. Milk prices can be funny at times, too high and too low are never good, but at somewhere in the middle, everyone is a winner.

We have just signed up to be part of an Agri-Food and Biosciences Institute (AFBI) research project assessing heifer calf health, mortality/morbidity and performance from birth through until the end of the first lactation. To us and most dairy farmers, heifers are the future of the herd. A lot of time and money is invested in them and looking at how health status and diseases can affect them is a very worthwhile study.

A few weeks ago I was invited to be part of a meeting to look at the effects of milk fever (hypocalcaemia) in cows and try to find practical solutions. It is not a new problem, in fact it was first diagnosed nearly 200 years ago, but the reasons behind it are becoming clearer.

The group consisted of nutritionists, scientists and researchers. Some of the science was a bit over my head, but the facts and figures proved very interesting. There is a sudden loss of 30-50g of calcium in milk at onset of lactation. Hypocalcaemia has two main roles: decreased muscle function and decreased functionality of the immune system. Cows with a compromised immune system are more exposed to high somatic cell counts (SCCs), retained placentas and metritis. The number of sub-clinical cases affecting first-lactation animals is thought to be about 25%, rising to somewhere between 40-50% of mature cows.

Researchers are now looking at the time delay in the release of vitamin D3 and absorption of calcium as ways of helping reduce clinical cases to 1% or less. Apologies for the information overload.

Thomas Steele milks 450 Holstein Friesian cows on a 263ha farm in Co Down, Northern Ireland. He was 2012 Farmers Weekly Dairy Farmer of the Year.