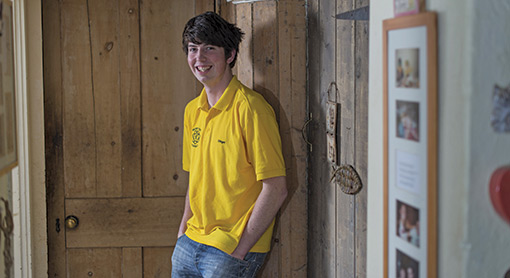 The trials and tribulations of getting a farmer away from his farm are many, but last month’s efforts will take some beating.

In September I received an email asking me if I would like to attend the Farmers Weekly awards. The catch was I had to invite Dad. To make matters worse, he gladly accepted!

This operation required train tickets, new suits and logistical planning that would embarrass the armed forces.

The big day arrived and we were all set. The maize was harvested and sheeted down, no calves were due and we’d even refilled the concentrate bin. All was OK so far.

One of my heifers had twins and typically they split up in opposite directions, but after getting them together and back with mother, I had finished for the morning. There was plenty of time to shower, change and eat breakfast before we caught the train.

Instead of walking through the exit yard as it was full of cows, I decided to walk around our bottom yard. Remember that concentrate we ordered? It was now lying on the ground – 18t of our feed company’s finest, to be precise. A massive split had opened up in the side of the bin overnight.

I called our supplier – he really meant every one of the expletives he hurled down the phone. I emailed pictures and left him to come up with a plan. Why did it have to happen when we were going away?

We arrived at the station and I ran across the bridge to our platform. I saw the conductor shutting the door, so I barged him out of the way to board the train. I had to stall him once more to allow Dad to board. Thankfully the train was running three minutes late, so we just caught it.

I used my mobile a lot that day. A sucker blower was organised to collect what was on the floor and the parlour hoppers were topped up. A replacement bin was organised and dispatched, ready for when we got home the next day.

The new bin was installed and Saturday morning more concentrate arrived and everything is now back to normal.

All in all, a tiring couple of days, but the Farmers Weekly Awards night was something else indeed!

Ross Symons farms 200 dairy cows, including his own small herd of pedigree Holsteins, with his parents near Truro, Cornwall. They are converting their year-round calving herd to autumn-block calving.