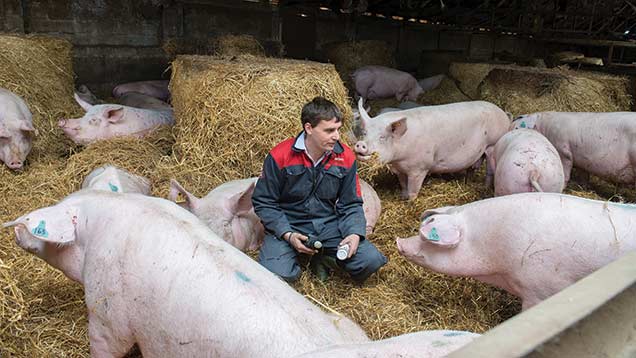 A good spell in mid-April allowed us to sow the spring barley in good conditions.

Looking out of the window as I write, it is a real pig of a day (excuse the pun), cold and wet and the spring barley is changing from green to a grey blue, so might I, if I was stuck out there.

This year we are growing feed barley in the fields nearer the piggery as they tend to get more slurry and the variety we are using stands reasonably well.

We are trying a high-yielding, spring malting variety in the other fields as it seems to have a yield potential, but may struggle with straw strength.

Because we are predominantly on slats, straw is in plentiful supply so crops will be kept short in the fields, making combining easier.

Election fever and a royal baby are hitting the news headlines currently. The new princess will probably not affect the farming community, but the new government will.

A financially stable country with consumers willing to buy British products, a workable fair basic payment scheme and good weather on tap will do for starters, we should not ask for the impossible.

Pigs are growing well, but we have had a spell of sudden deaths in the finishing pens.

Our vet has done some post-mortem examinations and we have sent pigs to the SAC vet labs. At the moment a clostridia problem is a possibility, but we are still waiting for final results.

Pigs dying a few weeks before slaughter is not good for the bank balance, hopefully we get to the bottom of it soon and work out a solution.

With sowing past we have had time to get the batch weigher for weighing pigs as they move from the weaner building to the grower building made and installed.

This will make moving and weighing pigs so much easier and let us know how each batch is doing.

We just need a weighing system at the finishing end now to get a good tight range in the kill weight.

If anyone has a good handling system, I would be interested in hearing about it.