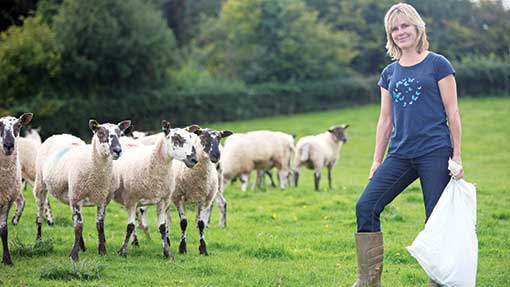 The forager has just left and with the maize now in the pit, our harvest is finished for 2014. What a relief and what a great harvest.

We recently purchased three Charollais tups to join our testosterone-fuelled ovine team. Activity has been carefully monitored and our first lambing course dates for 2015 have now been put on the website.

Buildings are being prepared ready to house cattle, the woodshed is full and cupboards are brimming with preserves made from nature’s harvest. It was a race this year to get the sloes and blackberries in quickly as our son Sam is very enthusiastic with the hedge trimmer!

I’m going to end this month’s column with a bit of a rant after watching the news on TV. I heard this definition of biosecurity: “Procedures or measures designed to protect the population against harmful biological or biochemical substances.”

As farmers, the key to good biosecurity lies in reducing and controlling the movements of people, vehicles or kit into areas where your farm animals are kept.

In the event of a dangerous disease, we clean and disinfect protective clothing, footwear, equipment and vehicles before and after contact with farm animals. During the foot and mouth outbreak this was paramount. Today, many farms are shut down to minimise the risk of the spread of bovine TB.

I have just watched a British film crew reporting from West Africa on the Ebola outbreak who will fly back and face new screening measures, which experts say will have little effect in preventing the spread of the disease.

Surely biosecurity should be paramount at this time to try and stop this deadly disease entering the UK. Dogs used to be put in quarantine for six months to prevent rabies being brought into the country. This was replaced by the Pet Passport scheme which although has given canine travellers more freedom, has also introduced some new health issues.

We are an island and as such should have a better chance of managing security. Rant over.

Kate Beavan farms 200ha with her husband Jim on one of two family farms near Abergavenny, Monmouthshire. The main enterprises comprise 900 breeding ewes and 50 suckler cows. Meat is sold direct to the family’s traditional butcher’s. Kate and Jim hosted Lambing Live in 2010