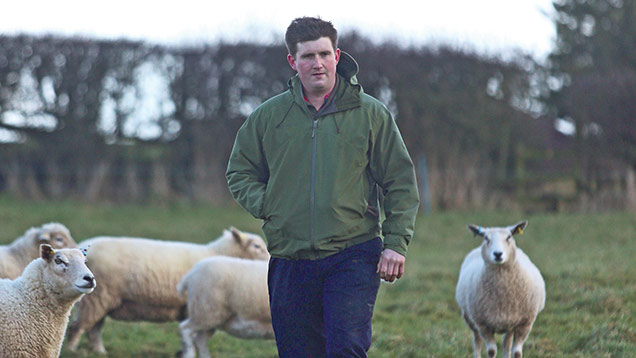 It has been a very busy spring here at Glen Farm, with lambing nearly at an end. There are just a few ewe lambs hanging on so I’m still getting up at first light to check on their progress.

All in all it’s been a good lambing with some good numbers and quality, fast-growing lambs on the ground. Lambing ewe lambs has been far less problematic this year. All of this year’s ewe lambs were home bred and tupped a month later than the main flock.

They were in much better condition at tupping than in previous years and with larger frames. The management and nutrition pre-lambing has also been better and helped keep lamb size down. Hardly any needed assistance, despite using Abermax sires.

I’m very pleased with this and will look to put several hundred to the ram this autumn to help increase the flock size going forward.

With lamb prices as they are I’m confident that we have the right type of ewes and low-input system in place to offer good returns even during volatile times.

The sheep enterprise is starting to show a much better return than either arable, dairy or beef would do both in terms of margin/hectare and return on capital investment.

I would urge any would be new entrant to consider sheep as the most viable way into farming.

That, together with some sort of contract farming/rearing to cover costs, offers a very sustainable business model, which both landowners and bank managers alike will favour.

Spring grass growth has been slow to get going, partly due to low soil temperatures and drier than normal conditions and partly due to a significant delay in approval from the Environment Agency for us to spread digestate waste.

This delay has cost me several thousand pounds in lost dry matter and productivity for which I will not be compensated. Admin departments need to consider that their incompetence can have serious effects on people’s businesses and livelihoods and I would urge them to pull their socks up.

Similar problems with BPS concern me and many other farmers. I do hope the new government will address such concerns.

With the election now over and done with it will be interesting to see if the Conservatives deliver on their promises or whether agriculture has been subject to the usual pre-election rhetoric that we have become accustomed to.

It would be nice to have both a government and general public that are behind British farming, but I feel that we can’t rely on this and need to paddle our own canoe going forward if we want to compete in both a national and global marketplace.

It is probably more important to worry about your own farm business before concerning yourself with the woes of others or the industry as a whole.

Jim contract rears 900 calves a year and has a growing flock of Aberfield cross New Zealand Romneys on a county council farm. He also runs a contract gritting enterprise in the winter.