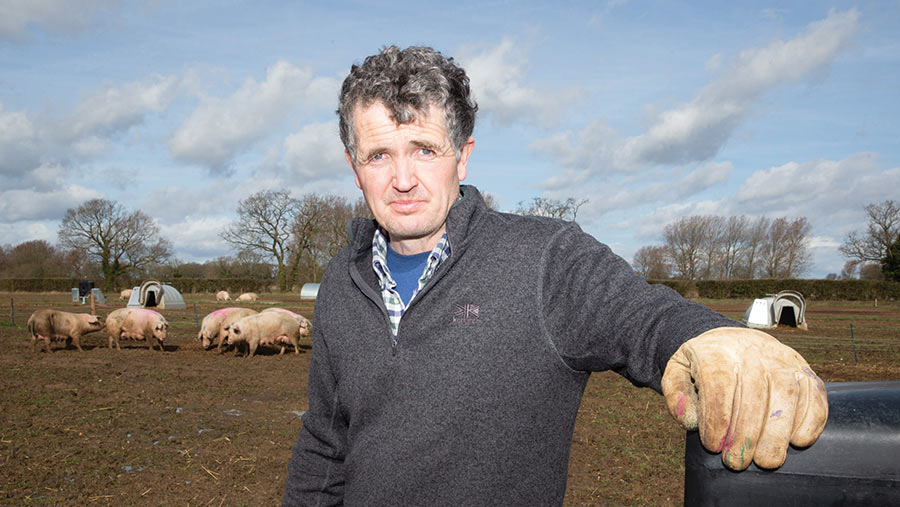 It’s been a busy month and 2020 feels to be racing by with lots of progress made. What adds to my struggle to remember that it’s already August is the loss of the regular summer events such as Glastonbury and Goodwood.

The cereals, on the fields we move pigs to next, have been harvested and we have managed to negotiate a much later move date than usual – February 2021.

The hope is that we help overcome the problems which caused much of the grass we had drilled last August to be lost over winter. It failed to recover in the spring.

The sows went on way too soon last time and the grass cover never had a chance to establish.

We’re also going to experiment with some alternative seed mixes this time. Norfolk Rivers Trust, Anglian Water and AHDB are helping fund a large area of trial plots working closely with seed supplier Kings of Diss and with BQP helping us do soil testing and case study work.

We will look at soil health and nutrients before, during, and after the pigs have been on the fields. Durability and ease of management of the plots and any noticeable effects on the pigs will also be monitored.

Three mixes have been selected, the first is a typical pig mix much like we have used before containing rye grasses and red fescue.

I hope that we will be able to learn much more about cover crops for pig fields and how we can maximise the benefits of the paddock flipping idea that I’ve already established here.

This is where the sows get 5/8 of their paddock at any one time and the other 3/8 gets rested, giving it time to rejuvenate.

An often-overlooked advantage of keeping pigs on green cover is it makes the farm a much nicer place for us as stockmen to work and take pride in.